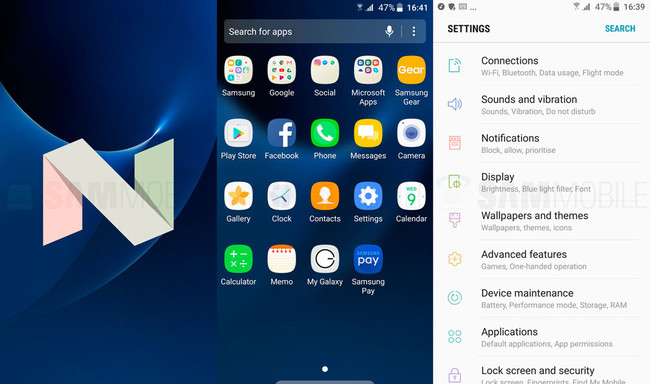 Android Nougat will distribute slowly through the terminals of different manufacturers. In some cases the update comes suddenly and without anesthesia, while in other comes after a testing for a part of the community thanks to a program of betas. Sony can be considered to be almost a specialist in this, but it is not the only one.

Samsung also seems to have been pointed to this small fashion, and that is that is the best way to provide an update with as much stability as possible. Terminals the family Galaxy S7 they are the recipients of this program of betas, and why we’re going to mencionaros the main changes that will suffer the software on these smartphones. 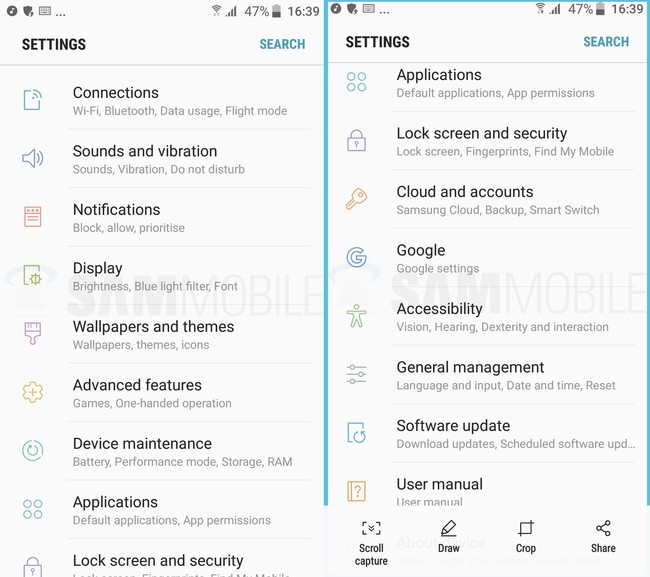 One of the most important changes will occur in the settings, and it is that Samsung seeks to simplify so that the user will not be lost among millions of options not desired. To do this will shorten the amount of options by grouping them in a more efficient way and, thanks to the support links relative, you will not lose accessibility to the options of your device.

The titles of the different sections of settings will be more clear to appear in capital letters and in bold type at the top of the screen, so that the user can recognize them instantly. In those places that there should be a check box, this will now have a circular shape.

Until now, if you wanted to modify the way in which they read the texts on your terminal, only you could change the font and its size, but in Android Nougat, in addition to that, you can change the screen size to your liking from the same section.

Changes in the shade of notifications and quick settings 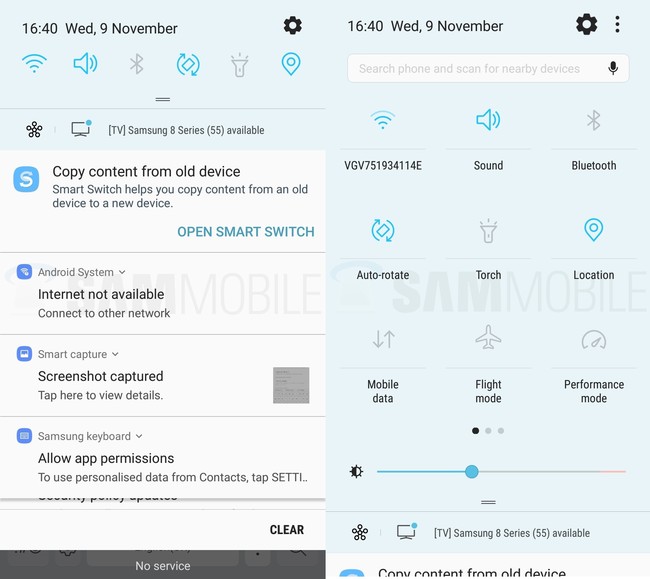 In this part, in addition to the aesthetic changes are relevant, we can observe how the panel of fast adjustments, if necessary, would endure multiple pages, as is the case with the interface of Huawei or CyanogenMod, for example. In this way the icons can be placed spaced to each other.

Quick Connect and S Finder are now integrated, so that in order to perform a search using S Finder, you will simply have to unfold the curtain of notifications and, in addition, you will be able to show the nearby devices with which it can connect (via Bluetooth, NFC, etc). Another change is that you will not need to access the settings panel to connect to a Wifi network in concrete, you only have to click on the icon text.

Going to the part of the notifications, now they are grouped together by application of a more efficient way, something that is already enjoying quite a few models of smartphones, but in addition, in those apps that allow it, you can reply from within the curtain of notifications if desired.

Changes in the lock screen 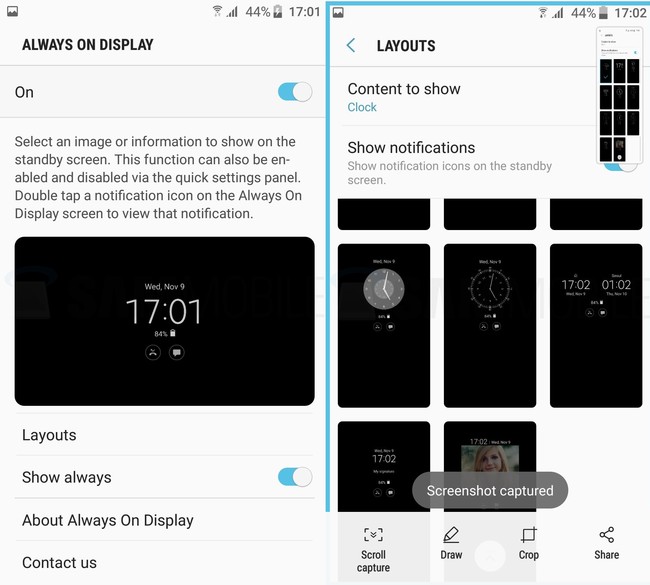 The lock screen is not absent of changes, and we’re going to start specifically for the screen Always On, it receives a few slight enhancements. To begin with, you can change the style of the watch, as well as your color and set your own image as the screen Always On. Another interesting change is that clicking twice on a notification you can get access to this app.

The lock screen as such has also received its dose of love, and is that in addition to the cosmetic changes, the cards of notification have been improved to display some more information, and to group them in the most efficient manner possible.

Changes to the start screen and double screen

On the home screen, we will be able to use the shortcuts on the launcher, you can already see in the Pixel and some launchers from third parties to access their options in a way fast. The folders, for its part, now supports multiple pages of apps by navigating to the left or right to locate the desired application.

Talking about the apps and folders, icons has undergone a very slight aesthetic change, basically a change in the tone of your color to bring it a little closer to the language ‘Material Design’ that has been with us since Android Lollipop.

as to the double screen, now is more easy to handle to be able to change the size of the same in an easier way thanks to few controls that appear when you press on the part that divides them. In addition, you’ll be able to open extra applications using a floating window while you use the split screen. 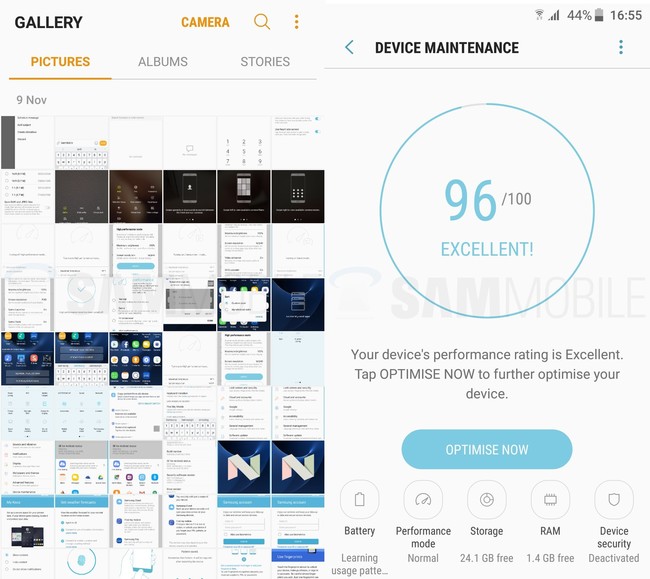 Some of the proprietary applications Samsung, have also had its changes. Let’s start with your calendar, that before it had the name of S Planner and now it is simply called Calendar. This app now will be easier to use and, in addition, it has been modified a little bit the aesthetics of the same.

In the calling application, has been modified aesthetically to display most amount of colors, as well as a few icons ok or reject call more modernized. Also you can find clearer information about the call that has been made or received.

The interface of the camera has also received the attention of Samsung, and have made every effort to simplify it as much as possible.** The part of quick settings has gone from having 12 icons to only the four essential**. In addition we have added a number of gestures to switch between cameras and shooting modes.

The native apps of Samsung also have received their changes, mostly with the intent to simplify their use and make them more pleasant for the user.

The gallery has also been improved, replacing the drop-down menu for the tabs which you can access by dragging from one side to another. If someone uses the Smart Manager, this app has also received aesthetic changes and, in addition, it has simplified the way in which you can see the total optimization.

In the section on energy savings, this has changed of location to be placed in Settings > device Maintenance > Battery. the depending On the level of savings of energy that you use will change the screen resolution (Off = WQHD, Medium = FullHD, Maximum = HD), though you can modify the settings of this section.

finally the Messages app native Samsung will also have a change, simple but effective: in forward you’ll be able to group messages by conversations or contacts simply by using the tabs at the top of the screen.

As you have seen, there are a few changes that will receive the terminals of Samsung as you receive the update, although no changes are actually huge, they are quite remarkable to the naked eye.

Via | GSMArenaMore information | See the full PDFXataka Android | The first screenshots of Android 7.0 Nougat in the Samsung Galaxy S7 show a new interface

–
The news These are the changes that will come to the Galaxy family S7 with Android Nougat was originally published in Xataka Android by Santiago Luque .