Just a few days after its release it was discovered that the Samsung Galaxy S7 / S7 Edge hides a menú climbing hidden image. But the procedure to access it, but does not require root, is a bit heavy and need Nova Launcher. The xatakeros confirmed to us that also works on the Galaxy S6 / S6 Edge Android Marshmallow.

That is over, because the last update TouchWiz has left the possibility of scale image on the screen of these smartphones without requiring any special process . Everything is a new option in the setup menu.

How to scale the image of the Galaxy S7 / S7 Edge

Changing points pulagada (DPI) or what is the same, sacrificing sharpness, it is possible to move to a more compact look that allows them to fit more icons and items on a screen of the same size, depending on what has front. 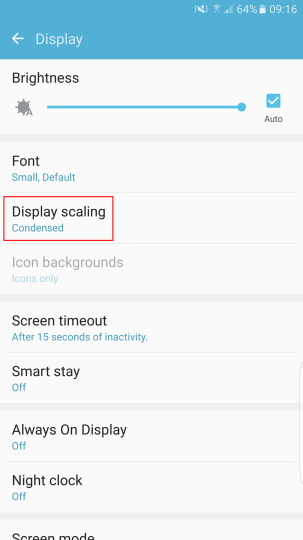 Interestingly, the company has not been informed of this development in its periodic communication. Perhaps this is a way to recognize that users are ahead of one of its surprises and, therefore, has ceased to be. Or this feature was not polished at all when the smartphone went on sale or the keeping were to have a small knock on effect in the near future.

Modifying the appearance of the image is an issue that developers are internalized, aware that not all users have neither the same tastes nor the same vision. The previous version of Android N and includes a scaling function , although no expansion and condensation