Trailer of ‘the Story of a marriage’: Scarlett Johansson and Adam Driver divorce in the new film from Noah Baumbach for Netflix

Eye to this. is Netflix has unveiled the first footage of ‘Story of a marriage’ (‘Marriage Story’), a romantic drama led by Scarlett Johansson and Adam Driver. According to the synopsis official, the film is a portrait of a compassionate and profound of a couple who tries to keep her family together after their divorce.

A history of (un)love, two versions

An interesting aspect of the film is that we are going to see two versions of what happened, the point of view of each protagonist; that’s why Netflix has opted to release two tractor trailers and two posters, each one with a perspective. It is not something new, they recently did Ned Benson in ‘The disappearance of Eleanor Rigby‘ (2014), but it certainly is not usual.

‘Story of a marriage’ is the second work directed by Noah Baumbach to Netflix after ‘The Meyerowitz Stories (New and Selected)‘, one of the two feature films with the platform competed in Cannes before the festival was to change their rules (the other was ‘Okja‘). And again, Baumbach is once again an interesting deal because, in addition of Johansson and the Driver, here act Laura Dern, Alan Alda, Merritt Wever, and Ray Liotta, among others.

‘Story of a marriage’ will be presented in festivals like Toronto and Venice, before arriving in homes around the world through Netflix. For the moment there is no date for the premiere so that will have to be patient… 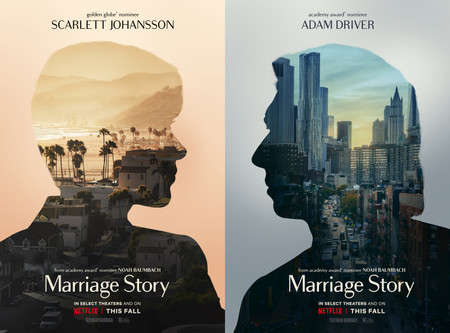 'The irish' launches its trailer: Scorsese reunites with Robert de Niro, Al Pacino and Joe Pesci in an epic criminal drama for Netflix

Trailer for 'Jojo Rabbit': Taika Waititi is Hitler in the new comedy from the director of 'Thor: Ragnarok'

Trailer for 'I am Dolemite': Netflix resurrects Eddie Murphy in the biopic of a legend of blaxploitation

–
The news Trailer of ‘History of marriage’: Scarlett Johansson and Adam Driver divorce in the new film from Noah Baumbach for Netflix was originally published in Espinof by Juan Luis Caviaro .