Troll Face Quest Classic, the game trollear or be trolleado The number of games Google Play we are innumerable, there are from those with more spectacular to those with a more retro look or simple graphics. There are arcade games, RPG, shooters, puzzles, strategy … could happen here half-life I am naming types of games, but I want to stand a little on one in particular: Troll Face Quest Classic

At some point this was our Internet appeared the famous “troll face”, those faces drawn and whose smile is between malicious and “I’ve screwed up, but fine, and I like that.” There’s a troll subculture that is everywhere (games, forums, show …) and search annoy someone badly

in this game trollear need to get through screen or be trolleado and repeat until you succeed . I have decided to talk about this game because I made certain grace, and probably some will make it too. Not that each level make a trmeneda grace, but if you like “troll face”, in this game you’ll swell to see them.

What hell is this game? Your mission in Troll Face Quest Classic is spend each screen by clicking on any one or more correct elements , but if you’re wrong I’ll trolleado and you’ll be doomed to repeat the screen. Sometimes you have to drag an object, or touching several times about it, or touching various objects before an action is over.

The game has a total of 36 levels I managed to spend a couple of days without spending too much time with what could be considered quite short if you hit in a few opportunities, but if you can not give the answer to the screen can make you end up bored with the game, though , yes, you have a limited number of tracks to help.

graphics and simple gameplay, but no tutorial This will be a game to be able to run on any mobile Android without problems thanks to singles are its graphics. His aesthetic is very troll around , full of different faces depending on the level and the actions you take and each. The game, during the time you’ve tried it, not a problem of fluidity.

In terms of gameplay, the easier it can not be, simply must play in the right places . The problem? there is a tutorial to tell you what to do, although it is not necessary, the only thing is that it never hurt to warn that there are levels in which you play several times an object, drag or let down about it.

it has no long learning curve, because in fact touch on the right side of the screen. There are times when you should play at a very specific point, such as the level at which you are in a chair at the edge of a roof and a guy who depend on the subject with a son. Luckily have a limited number of tracks , so it is best that you use them wisely.

A game with relatively little publicity, free and light. This game will trollea as possible, but also challenges your intelligence and sometimes your patience. If you solve levels agile, possibly you as you pass the same day you download it, but should you assume you’re going to have to ugar the same level several times before have fun.

as for advertising, it appears with a medium frequency when you have to restart the level (on average every two or three reboots level), which closes easily. Also, for additional tracks , you can see a video that lasts between 15 and 30 seconds to get 3 additional tracks.

In some levels there is a hat, and the collect 10 unlocks a secret level . I’ve got nine anything else, so I do not know what will. On the other hand, you can play Troll Face Quest Classic anywhere, even on the subway, then you need not be connected to the internet to trollear or be trolleado.

The game is Free with advertising mentioned, not suitable for children under 12 years old, weighs less than 30 MB (depends on the device, I weighed me about 26 MB) and requires Android 2.3 or higher. In conclusion, it can be an occasional game that has a certain grace and it will rarely present any problems. 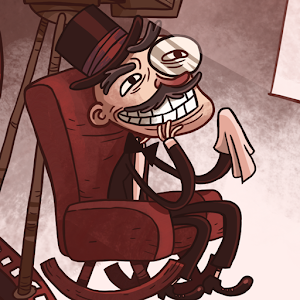 –
The news Troll Face Quest Classic, the game trollear or be trolleado was originally published in Engadget Android by Santiago Luque .