Typoman, the award-winning platformer and words comes to Android

At the end of the year 2015, an indie game released for the Wii U captivated the critics for its originality and unique experience, a platform game starring characters: Typoman of the study Brainseed Factory.

Now, after several awards and releasing versions for Nintendo Switch, Steam, PS4 and Xbox One it is the turn of our mobile devices. the Typoman comes to Android, but it is not the only good news, the best thing of all is that it is free.

The 15 best platform games for Android

Typoman is a platform game that estéctica very reminiscent of another acclaimed game, LIMBO. Both have atmosphere dark and disturbing, with a platform game full of obstacles which must be overcome by solving puzzles, but in the case of Typoman are resolved with words. 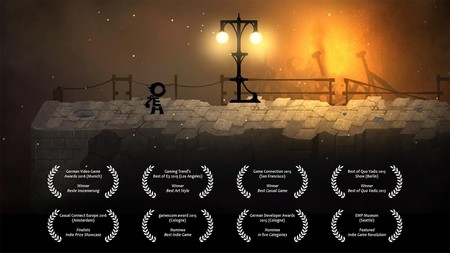 Analysis of Typoman, or how it would be LIMBO if you were devoted to word games

Typoman we find a character formed by letters, with the word ‘Hero’ (hero in Spanish) in a world full of letters, where the enemies are also words. To advance through their levels, we have create, change or destroy words with the letters we find.

This game will captivate you by its aesthetics and gameplay since its first minute. Typoman cometh translated into Spanish with the exception of the puzzles, their levels, which are in English, but with a basic level we will not have many problems in switching the game. They give us clues.

Typoman comes to Android in a free version with ads, but which we can remove by paying only 2,19 € in front of the 8,99 eur cost of the PC version.

Super Mario Run: now with new game mode, more levels and on offer at half price

–
The news Typoman, the award-winning platformer and words comes to Android was originally published in Xataka Android by Cosmos .