Ubisoft is working with Bolivia’s army towards the development of Ghost Recon: Wildlands

. For the sake of atmosphere and realism
Ubisoft , as part of their work research Ghost Recon: Wildlands , has been working in Bolivia, collaboration with an elite unit of the army of the country .
the new game in the series Recon Ghost Recon precisely will be set in the South American country , offering the player a huge open world according to Ubisoft the largest to date hers ever seen in a title, realistic fraught with danger environmental. The French company said at a their talks Framed within the DICE Summit 2016 that seeks soak up the culture and the country something that echoes IGN
ago. In that conference, Tommy Francois, Ubisoft , has offered several details the rationale and importance of research in the games business. In fact, today have witnessed the work in Primal Far Cry .
” When you create a world for a game, I think it is absurd to simply stay in books. you need a dive itself. How do we do this? Well, we go straight to smell the grass . Leaving behind the screen of your computer. “

” to create a game world directly out to smell the grass, leaving books and computers aside “Tommy Francois, Ubisoft

During his talk Francois revealed that developers Ghost Recon: Wildlands spent a week in the middle of the jungle . In fact, one of his videos, showed a unit of Bolivarian army burning a cocaine laboratory hidden in the middle of the jungle. Ubisoft executive himself revealed the impact generated on the computer sent home consumption and Religious and cultural implications of the coca leaf for the people of Bolivia.
Tom Clancy’s Ghost Recon Wildlands hit PlayStation 4, Xbox One and PC . It is being developed by Ubisoft Paris and its main novelties we find the inclusion of an open world by which we can move freely to meet different missions that go entrusting us.
video: 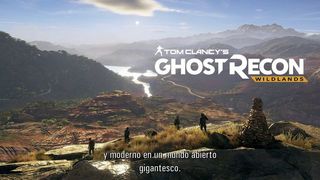 Ubisoft is working with Bolivia’s army towards the development of Ghost Recon: Wildlands
Source: english
February 18, 2016