Facebook announced a few days your change of logo. The main goal was to make it more minimalist and dynamic and, on the other, make that suit each one of the applications that the company has under its belt.

One of them is WhatsApp, application used by millions of people, and bought by Facebook in the year 2014 for 19 billion dollars. For if there remained any doubts about your property, as already warned the company, now the home screen and the settings show a “From Facebook”, which makes it clear who is its owner. 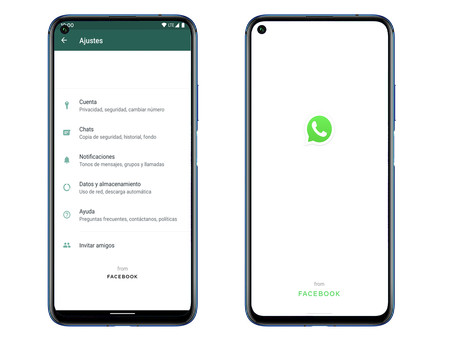 If the application WhatsApp was already showing in the settings a discreet “of Facebook”, the latest beta displays the same message,

but rather more large and eye-catching. When you open the app, see the splash screen, that uses the dynamic icon (you can change the palette of colors according to the app that is displayed) displays the message described above.

The interface of the settings of WhatsApp changes slightly, and is now more minimalist

The same change is shown in the settings, by the way, now show a tad more flat, with some slight changes to level design. So, Facebook makes it clear that WhatsApp is one of your apps, a change that will be coming gradually to other applications such as Instagram.

the WhatsApp application will never be safe, but we are going to tell you a secret: Telegram nor will be, says its CEO

similarly, let it anticipates the arrival of the dark mode because, in the event that we have enabled this mode in a compatible mobile this start screen becomes gray. This could be an indication that the dark theme of the WhatsApp application will not be pure black, although it is still early to draw any conclusions.

Discover that the app of Facebook you scan and upload to their servers, the libraries of our mobile, and we don’t know why

–
The news WhatsApp makes clear that it is the property of Facebook in its latest beta and anticipation of the arrival of the dark mode was originally published in Xataka Android by Ricardo Aguilar .