‘X-Men: Phoenix Dark’ re-emerges with a new trailer: the saga reaches its epic conclusion before the jump of the mutants to Disney-Marvel

Yes, there is a new movie of the chaotic franchise X-Men in the way. Five months after the first advance, when we almost have forgotten it, and the expectations are not very high, 20th Century Fox has launched a new trailer ‘Phoenix Dark (‘Dark Phoenix’) with the hope of reviving the interest and close the saga for all high – .

And that is that this installment is the last, without remedy, because now the mutants are Disney and will be part of the Marvel Universe this same year. In what way? It remains to be seen although it is certain that there will be reboot and new faces, as happened with Spider-Man. Is coming a new universe of the X-Men but before that, we can see the end of the story that we know of, that is to say, ‘Phoenix Dark’.

The last of Fassbender, McAvoy, Lawrence and company

originally Scheduled for November 2018, and then to February, then finally ‘X-Men: Phoenix Dark’ premieres in movie theaters June 7. The staging is run by Simon Kinberg, producer of the franchise that he made his debut as director, while the cast is, again, an interesting collection of names: Michael Fassbender, James McAvoy, Jennifer Lawrence, Jessica Chastain, Sophie Turner, Tye Sheridan, Nicholas Hoult and Evan Peters, among others.

Who is Phoenix Dark, the threat changed to ‘X-Men’ for always

The history of film introduces the mutants face their most formidable enemy and powerful: his partner Jean Grey. During a rescue mission in space, Jean almost dies by being hit by a mysterious cosmic force. When he returns home, this force not only has made it infinitely more powerful, but also much more volatile.

While fighting with the entity that inhabits in its interior, Jean unleashes her powers in ways that can’t control or understand. Jean falls into a spiraling out of control, doing harm to those he loves the most and begins to destroy the ties that bind the X-Men.

The family collapses and must find the way to join, not only to save the soul of Jean, but also to save the planet from aliens who want to transform this force into a weapon and conquer the galaxy… 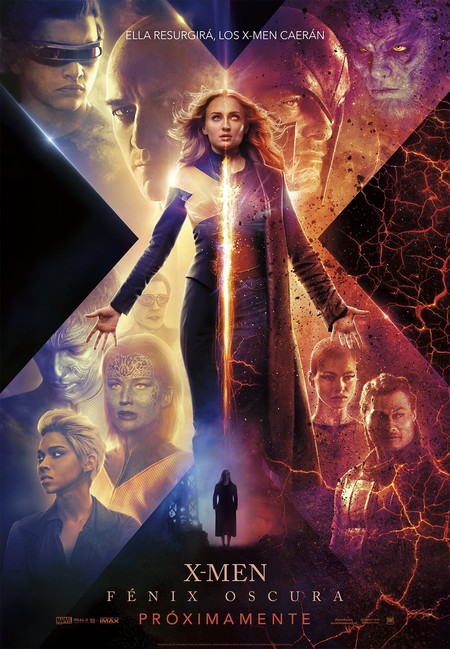 And the spin-off of ‘The new mutants’ still in limbo

let us Remember that there is also a spin-off of the X-Men titled ‘The new mutants’, whose trailer came out in October of 2017! Despite having faces popular (Anya Taylor-Joy, Maisie Williams, Charlie Heaton, Alice Braga, Antonio Banderas…) the film remains in limbo, to the frustration of the fans and the actors themselves. In principle, the premiere is set for August even though is rumored eventually it will come to movie theaters but it will launch on streaming. We’ll see…

Here is the epic trailer for 'Spider-Man: Far from home', with the trepamuros by Europe faced a mysterious villain

–
The news ‘X-Men: Phoenix Dark’ re-emerges with a new trailer: the saga reaches its epic conclusion before the jump of the mutants to Disney-Marvel was originally published in Espinof by Juan Luis Caviaro .

‘X-Men: Phoenix Dark’ re-emerges with a new trailer: the saga reaches its epic conclusion before the jump of the mutants to Disney-Marvel
Source: english
February 28, 2019