Xiaomi has patented a mobile phone, which is curved toward the four sides and is ‘all screen’

Although there are manufacturers that just unite to the fashion, it seems that now it is a fact that the era of the notch is coming to an end. Virtually all brands are exploring various alternatives to avoid the notches in the screen and a surface of the display increasing. The holes are one of them, but also generate questions about it.

well, Xiaomi has registered a patent application in the Office of Worldwide Intellectual Property (WIPO) that I could get, finally, the ratio of the screen/front of the 100% without resorting to drilling or sliding mechanisms. How? At the expense of bending the four edges of the screen.

So you are drawing on the post-notch: a “hole” and other innovations present and future in the front of the mobile

The average German Let’s Go Digital has discovered a new patent from Xiaomi that describes a smartphone screen bent by its four sides. To put it another way, it would be something similar to the frames of the Samsung Galaxy S9, but also in the top and bottom of the device. 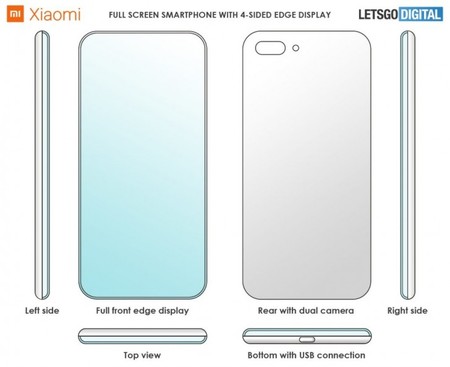 This patented design of Xiaomi, in addition, not features a front camera or in the form of a notch or a perforation, which means that he would give up that provision or that it would resort to some form of lens built into the screen, as it is rumored that he is trying to make Samsung. By getting rid of the front camera and bend the edges, we would have finally a screen that would occupy 100% of the front, a goal to which every time they aspire to more manufacturers. 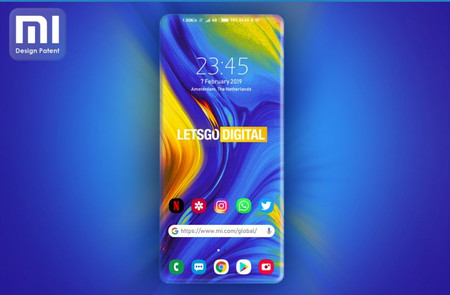 even Though the concept of achieving a mobile “all-screen” can be attractive, there seems to be a very handy solution, as shown in Android Authority, especially, if we try to put a cover to the device. Not to mention its fragility.

As we can see in the image, in addition, this patent presents at the rear a dual camera with an LED flash to the side and a USB connector in the bottom frame (probably C-type). No trace of a fingerprint reader or a jack for headphones. And also you observe buttons, which do not also a few recent models of other chinese brands: the Live APEX 2019 and the Meizu Zero.

A mobile gaming with folding screen and physical buttons, Samsung already has a patent

Samsung patented six types of notch are different, all of them of reduced size

–
The news Xiaomi has patented a mobile phone, which is curved toward the four sides and is ‘all screen’ was originally published in Xataka Android by Laura Sexton .

phoneia.com (February 8, 2019). Xiaomi has patented a mobile phone, which is curved toward the four sides and is ‘all screen’. Bogotá: E-Cultura Group. Recovered from https://phoneia.com/en/xiaomi-has-patented-a-mobile-phone-which-is-curved-toward-the-four-sides-and-is-all-screen/