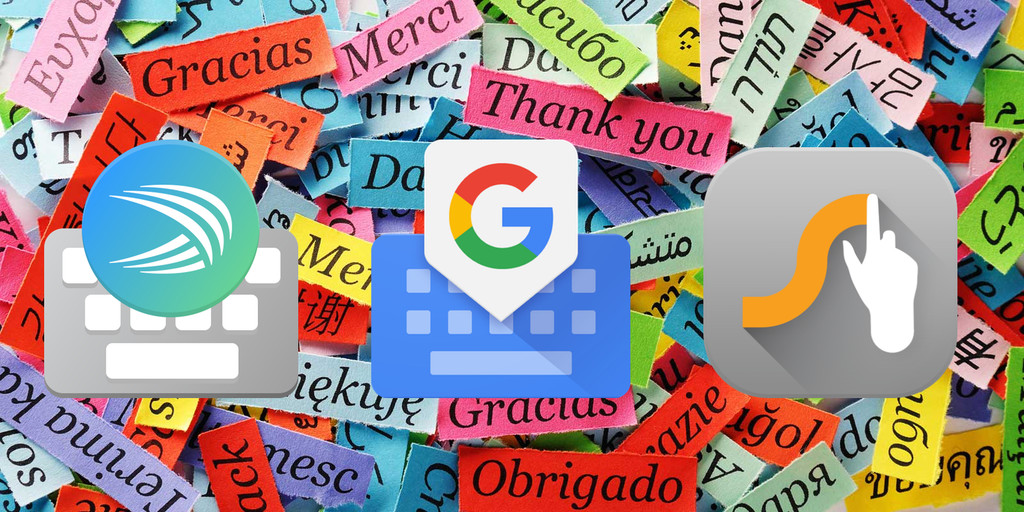 Many users write in the usual manner in two or more languages. In the case of Spain is very common due to the presence of co-official languages in each region, but in multiple countries it is customary to speak multiple languages interchangeably. Today we bring you a little tutorial for to adapt the keyboard of your Android to multiple languages, to be able to write English and Spanish at the same time, Spanish and Catalan, Spanish and basque, English and French… or any combination that use the same alphabet.

We have chosen of the four keyboards most popular Android: keyboard Google GBoard, Swiftkey, Swype and Flesky. But this function should be present in the majority of keyboards of our system.

No need to change the default language every time, the keyboards allow you to type in multiple languages even we offer suggestions correct according to what you’re typing. We live in a multicultural world, each keyboard application has its secrets, but the majority allows you to change and have two or more languages at the same time. 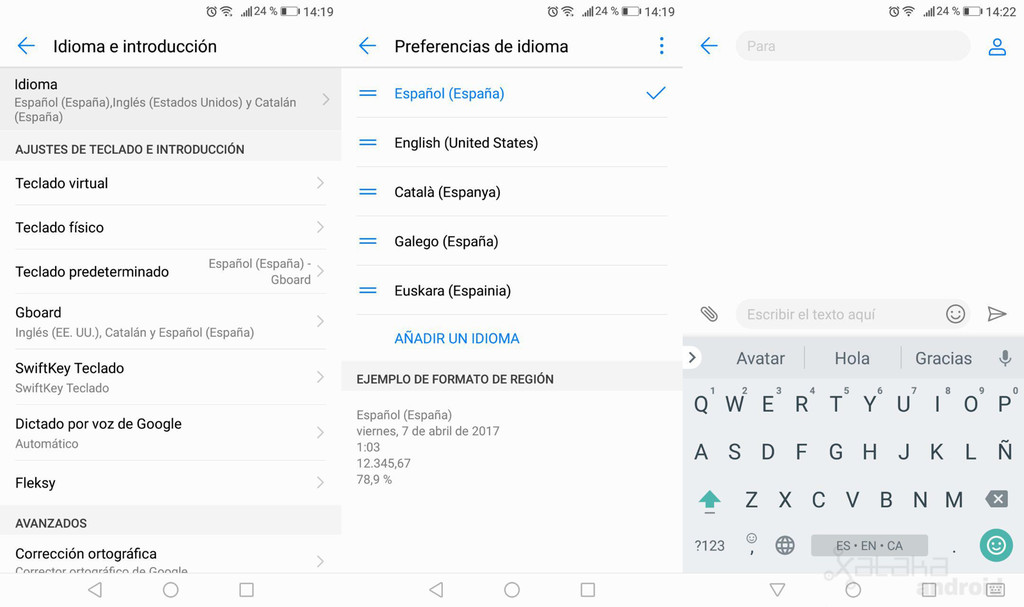 GBoard is the keyboard Google of all life, the one that usually comes by default on many mobile phones. We will begin by him, since in addition to being one of the most complete also allows you to write in multiple languages in a simple way and at the same time without any problem.

Next step. the Language & input > GBoard > Languages check the languages to use. Already have GBoard facilities but we also recommend to activate a couple of keys to the language exchange is more practical. 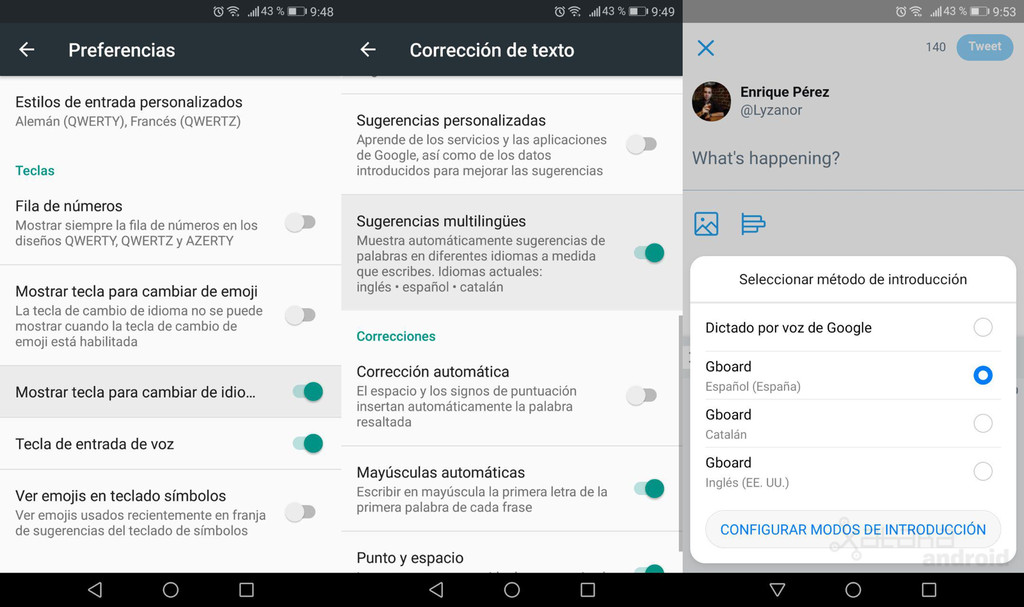 In preferences, activate “Display key to change the language”: it is a circle of the world that appears to the side of the space bar that when pressed will change the language. Although it is not essential as the keyboard will automatically change the suggestions if we started to write in a language that is not marked. Yes, for the autocorrect we will come good have this key at hand.

Another option that we should activate in GBoard is the Tips”multilingual”. must go to GBoard > Correction of text and there mark this option to allow the keyboard to find out automatically in which language we are writing and change the language of the suggestions.

it Works perfectly and we also mark the chosen languages among the that will change. In my case, being in Barcelona I have activated English, Spanish and Catalan, and it works very fluid. 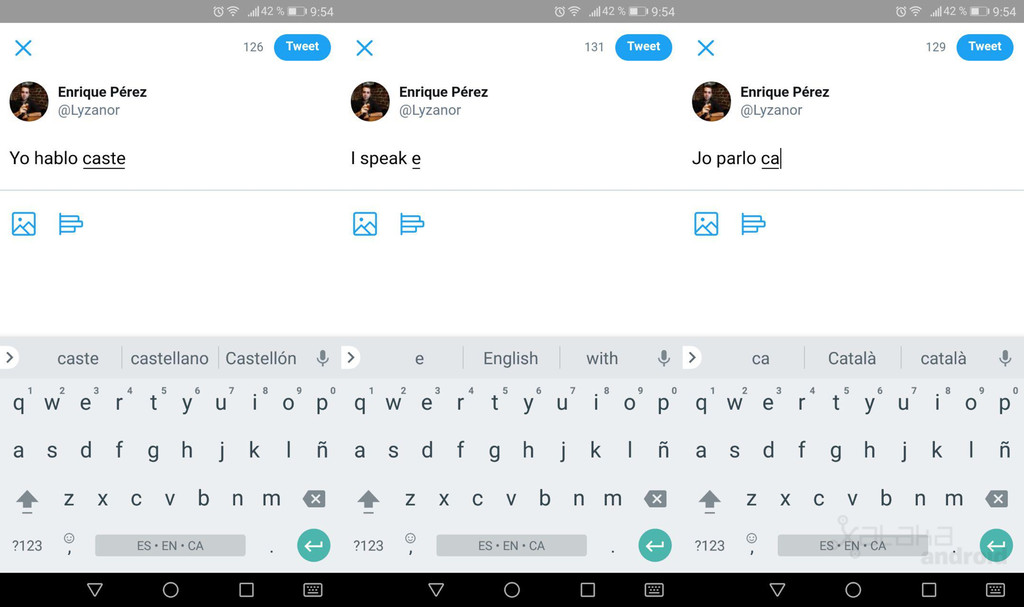 When writing in a social network or any messaging application that you can see in the space bar are marked languages. When we’re writing detects the language at the end of two words. It is incredibly comfortable and we recommend to all users that at some point in time change of language that will activate this function. 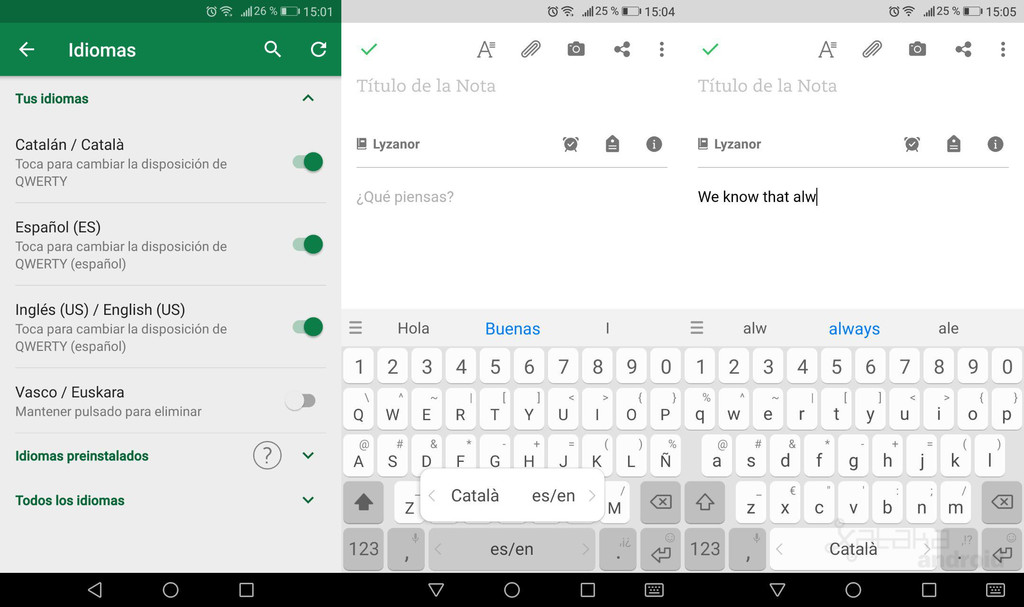 Swiftkey has a function very similar to the GBoard. The first step is to add the languages, so we have to go to Language & input > Swiftkey Keyboard > Languages > All languages and download those that you want. From that same menu will be where we will activate them on the keyboard.

At the time of writing it is very simple as its own keyboard detects the language that we will go on writing, and we will create suggestions based on the language that we are typing. Very comfortable. Also if we hold down the spacebar will allow us to change language, but we will, although we have marked for example in English we can write in Spanish or Catalan, and will be detected quickly to suggestions. 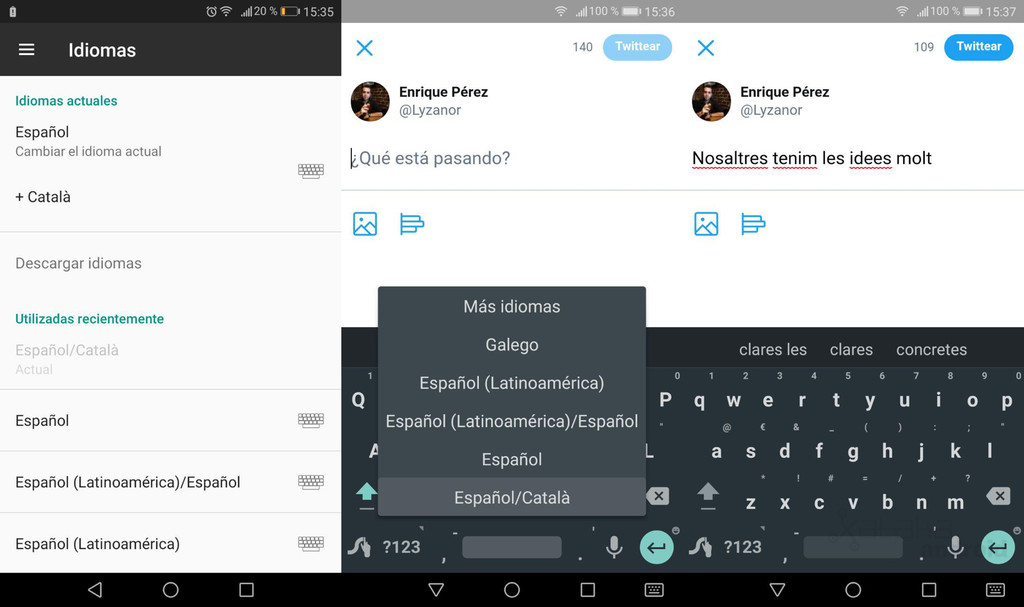 Swype, the keyboard that popularized the slip to write, it also has multilingual support. This works itself in a way different from the previous. Does not automatically detect the suggestions with three or more languages, but allows us to have a keyboard with a single language, or with two simultaneous. If we have downloaded three languages, we can create any combination of two between them. In my case Spanish/Catalan, Spanish/English or English/Catalan.

To switch between the languages selected, simply hold down the space bar. To add languages is as easy as all the time is: Language & input > Swype + Dragon > side Menu > Languages and there download languages in addition to choosing the current keyboard language and the additional that you can select. 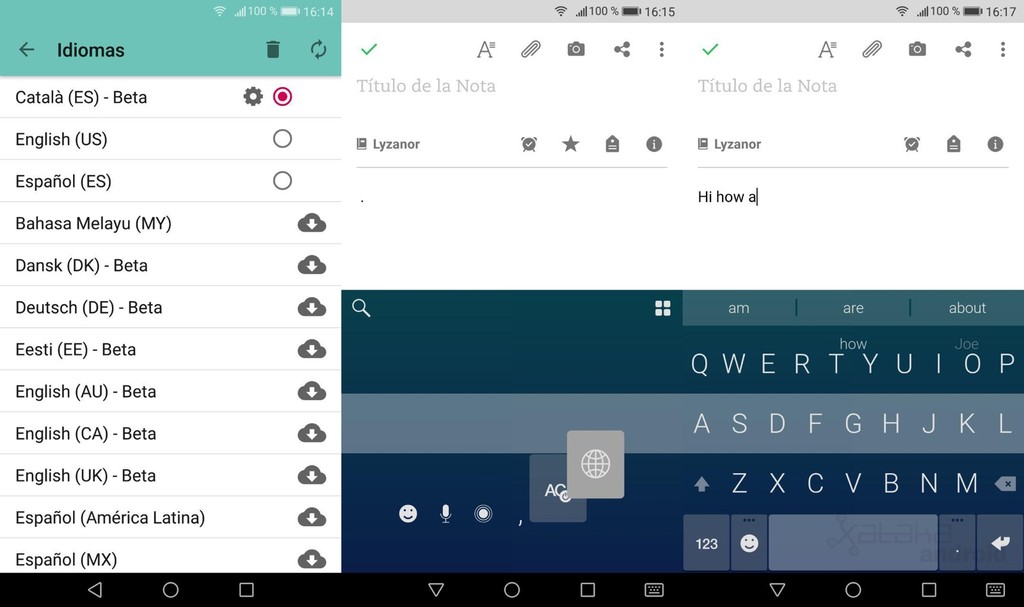 Language & input > Flesky > side Menu > Languages and there you will download the languages that you want. Some languages are in beta, but the most widely used operating at 100%. To change the language on the keyboard we will have to slip to one side of the space bar. There is also the option of holding the face emoji and there we will get to the language change, but it is a slower method. What is certain is that this latest keyboard is the one that carries the multi-lingual support less advanced.

I Hope you have been useful this little guide to change the language in the Android keyboard and to use two or more languages at the same time in the cell. What you used to do? Do you know any trick?

In Xataka Android | Gboard vs SwiftKey: comparative background between the two keyboards Android most popular

–
The news How to have two or more languages at the same time in the Android keyboard was originally published in Xataka Android by Enrique Perez .

How to have two or more languages at the same time in the Android keyboard
Source: www.xatacandroid.com
July 27, 2017