The platform wants to unite PonVozATujuego benders and independent developers

To promote the use of Spanish voices.
The platform href=”http://www.ponvozatujuego.com” PonVozATujuego founded with the intention to become the link the voice actors both professionals and amateur – and independent game developers , so that they can incorporate voices the characters of the game, an option often considered unattainable.
site, still in beta, has a simple directory of actors that developers can explore using filters, depending on the type of voice that look, listen and voice contact directly with the actors. For its part, the actors can do the same sailing between projects that need voices.
Platform is home both to the collaboration between the parties as to the professional collaboration , according to the conventions of the sector. In the first case, the lowliest developments can achieve added value very important for your game while an actor amateur thickens your resume and experience to be part of a real project. In the second case, the most ambitious developments are a more accessible way contact with professional actors, and these are another way of working in an industry that in recent years has become an essential part of their profession.

“If the developer directly will not market the game, you as a voice actor, as a professional, you decide whether to do it altruistically or not. Who in this world does not want to lend a hand to fulfill your dream? In this case, released a video game. If well for you, as an actor, can serve as a promotion is as difficult as the dubbing world, “said David Rodriguez, professional voice actor who has put his voice in Damn Virgins , the first independent title that has taken the platform .

Damn Virgins it is the leading independent game that has made full use of this platform to enter the Spanish dubbing. It is a adventure game developer and Luis Ruiz has had the voice of a professional actor David Rodriguez . “I was in the final stages of development and although it was my first game, I knew perfectly well that the dubbing was one of the key parties to give quality to the product. Then I met David and we went to work,” said Luis Ruiz, developer videogame.

PonVozATuJuego arises when its creator, Yova Turnes, he questions why actors amateur dubbing spend so much time and effort to bend loose scenes of video games that have not been dubbed into Spanish , or make their own versions of already folded games, when there are many independent developers who do not They incorporate voices for their projects due to lack of resources or simple ignorance of the possibilities that count. These two worlds, which are probably far from each other by mere ignorance, should have a place to meet.
PonVozATuJuego is a non-profit project . 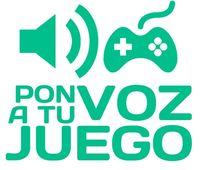