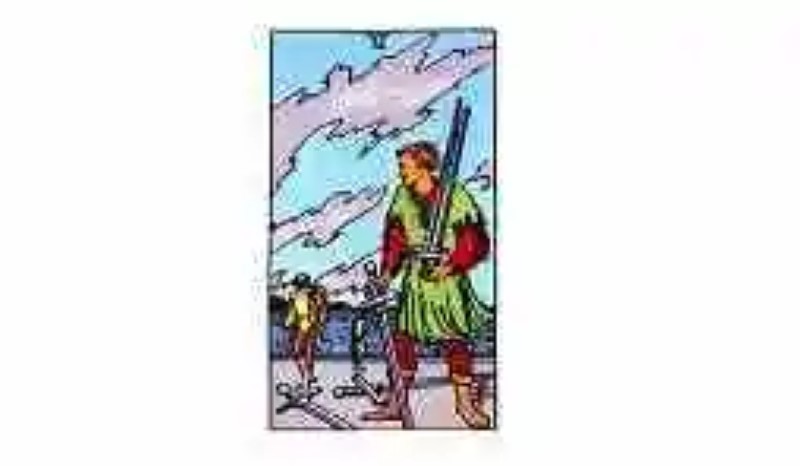 Known as Five of Swords, this card takes the fifth place in the Swords of the Tarot Lesser Arcane suit. In this entry we will summarize the symbolic features, as well as the general interpretations made of it by scholars of this divinatory method.

Based on The deck of Rider’s Tarot, in this card we can see a young man, dressed luxuriously, who holds three swords. At his feet lie two more swords, and in the background two subjects of yellow, whom the young man seems to see defiantly, as if he had just faced them or were about to do so, and who according to the connoisseurs in tarot perish severe pains.

Behind them all, the young man and the two subjects, a turbulent sky unfolds that seems to foreshadow a storm.

According to the symbology specialists, this card doesn´t hold in it any positive traits, which added to the number five – always related to pain and defeat – sends the consultant a clear message of loss, conflict and not winning the battle , but in a fight that is with ourselves.

In this sense, most tarotists agree that the Five of Swords has a close relationship with our inner world and with the love we feel for ourselves, but from a negative or conflicting point of view, that is, it refers to that the consultant or the person you are wondering about goes through a stage of internal struggle, in which he is also unable to see or perceive what is good in it.

You may also be frustrated with the results you have obtained throughout your life, specifically in terms of your personality or appearance, because this card also speaks to the nonconformity that the consultant feels when he thinks of any aspect of his life. In short, it is the battle card that ends in loss, even for both sides; because you fight with yourself.

With reference to the specific planes of existence, the Five of Swords also has specific meanings. For example, in the workplace, the presence of this card may be referring to a climate of hostility in the office, either by certain decisions and rules imposed by management, or by the colleagues themselves, who want to go into battle to cause some harm to the consultant or just make him go away.

However, the person must think very well if he accepts the fight, for the Five of Swords warns about victories that aren´t such, that is, winning pyrrrichly and not in the long term, since they are not combats made under the line of honor , but from disloyalty and vice, so sometimes – in circumstances like this – the best fight is the one that is avoided.

In this way, the Five of Swords appears in the middle of a reading – both on the work plane and in any other – to remember that sometimes it is best to retire in time, to engage in conflict with those who are not up to the task and may turn out to be enemies enough enough enough we’re always in danger, because we’re not dealing with honorary rivals, even if we win one battle.

In direct relation to work, this card may indicate that it is not necessary to submit to high stress burdens, humiliations or an atmosphere of hostility, if we also know in advance that we will not gain anything with them.

Percentity is the most convenient way to flow into healthier space, where we can develop without compromising our well-being and self-esteem. However, it should not be forgotten that like all Tarot cards, the Five of Swords must be analyzed in context, in order to establish the true message it brings with it.

Conversely, if the consultation is based on the love plane, the appearance of this card may be warning about moments of friction and confrontations with the couple.

We cannot forget that the card of the Five of Blades also refers to the excessive ego and the habit of gloating, characteristics that are always linked to low self-esteem, and that turn those who have them into selfish, selfish, impulsive and superb, so it is natural that they always seek to impose their point of view, to feel the pleasure of being right.

In this order of ideas, some cartoonists always suggest asking yourself a thoughtful question about what matters most to your partner, whether to always be happy, or to be right. The answer will surely clarify the future and make coexistence and communication much more affable.

Like all the cards of this divinatory method, apparently emerged in medieval Italy, the Five of Blades also has a specific meaning if it comes to appear in reverse, that is, head. In this case, the card fails to get rid of the negative traits it entails when it is right.

On the contrary, it continues to point out the situation of going to a match where we will not emerge victorious, or if we do so we will not be able to indulge ourselves to savor victory, for it isn´t a triumph won with honor, in good lid, or that brings us happiness. However, it should be analyzed together with the other cards to investigate what plane this card is pointing out this situation.