Welcome to the world of MiWi, Wü, Wll, WiWi, and Sports Vii. The console Nintendo had epic imitations because of their success.

We visit consoles more false and strange who has seen the video game industry. First was the NASA (clone of NES), then the PolyStation, and since then there have been many consoles in the whole to one hundred, or manufacturing devilishly suspicious, more commonly known as the anglo-saxon term “bootleg”. Editions are not licensed trademarks or interpretations, mixtures and fusions of the same. In the case of Wii, the success of your attractive proposal for more than twelve years she produced many, many fakes. Today I talk about the 5 worst fakes Wii, although it seems incredible that there are so many. 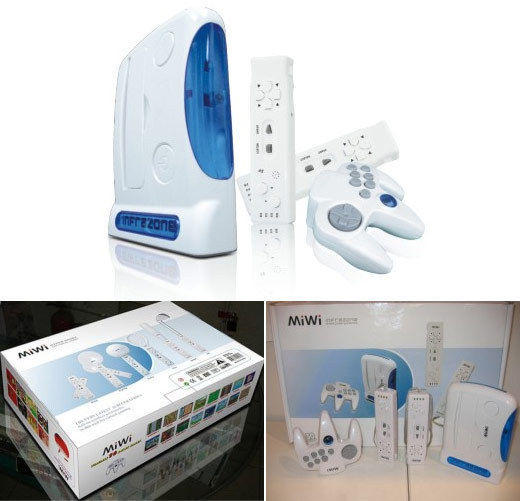 we Started with the MiWi a clone imperfect of the Nintendo Wii. At first glance, or from far away if we have myopia, can seem very similar to the real. In fact its great asset is to confuse the buyer a little informed.

The tactical trading of this type of imitations so ridiculous is always to play the ball, to see if the customer bites and confuses the console, and both craves her son with a bargain. Put a name that sounds similar to the console, MiWi for Wii, give you an outside look “similar” to the original and placed in the box a few sentences advertising to draw attention, which usually seem to be a satire blatant rip-off. 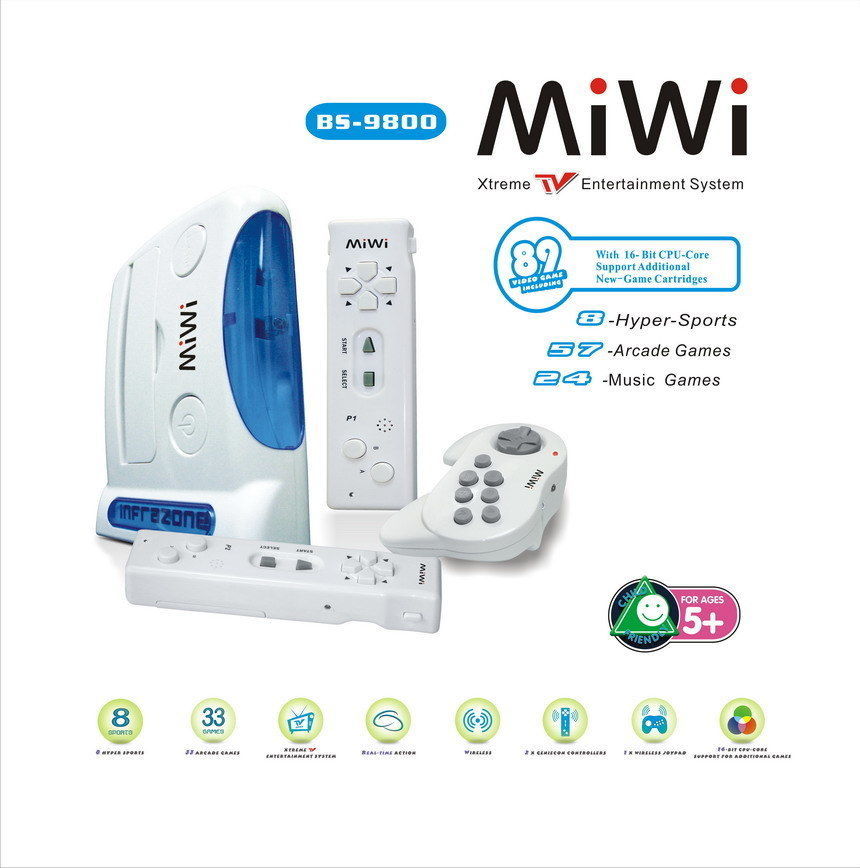 In the case of this MiWi surprised that they even bother to include controls to control wireless. Yes, their creators, Eittek Electronics, or have bothered to hide the plagiarism of the design of controls, although not precisely those of the Wii, because one of the controllers is an imitation of that used by the Nintendo 64. 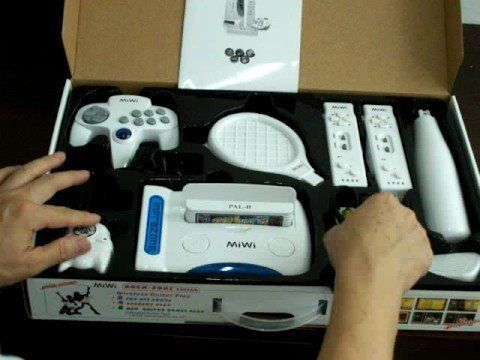 as for games, there’s not much to say since they also try to substitute some of the titles out of the Wii original. That is to say, sports games. Just the fact that it works with cartridges, a format distinctly inferior to those used by current systems, gives us a clue very precise indication of its fraud potential, but surprisingly works. The gift star with the one that comes with the console is a video game at least 23 sports titles different (style Wii Sports) on a single cartridge, another reason to be wary of its poor quality and imitation.

The Sports Vii, added to its name the lure of sports and the claim of the exercise of its peculiar title. Other console something more achieved and more similar in appearance to the Wii original Nintendo, and that was manufactured by Jungle Soft. Originally launched in China in the year 2007 and had included games of series. Employs the legendary operating system of Sunplus SPG taiwanese that is included in many of these consoles are false, and has 8.5 MB of internal memory for saved. units Vii sold cost 1270 yuan, that is to say, that acquire one of these consoles cost us around almost 200 euros. Was also released in several colors, arctic white, hot pink, electric blue.. Also have the following games which I play: Tennis, Fishing, Bowling, Golf, Ping Pong, kitchen provides cooking facilities, Dance, Baseball.. 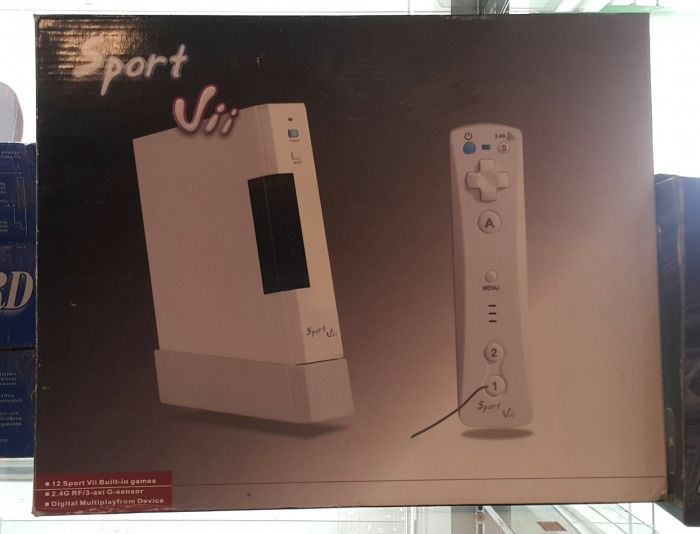 At least the control unit with the controlábamos this fragrant violation of the copyright was very similar in size and design to the Wii original, it is wireless and also has movement recognition. Though we could not point him to the screens.

The following example, the WÜ is quite curious, as more than a console false in itself, the aim of this forgery was oeuvre peripherals, accessories and gadgets fake supposedly compatible with the Wii. Are numerous, not to say multiple and varied different accessories that we were trying to endorse with a design apparently valid and legal. 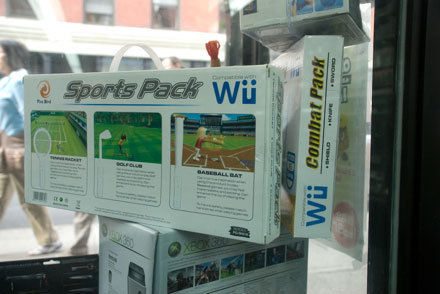 All of them were mostly accessories for the game Wii Sports, or combat with sword and shield. Even if they were not compatible even with the Wii. By what his acquisition meant to buy something that directly would not work or be compatible with any of our false consoles. A display of greater initiative and resourcefulness as they knew how to read the possible future need in Wii require accessories such as the steering wheel, or the adapter to convert the controls of Wii in a machine gun.

The example of WLL or Wll is perhaps the most vast and orthopedic to the ones presented above, which included hasa a small screen on the remote control of this Wii false. The command was almost hollow and completely pure plastic, something thicker and more difficult to grasp than that of the Wii, as well as a speaker unusually small. This compressed version and also more thick, he seemed to want to offer more things than the original, so that brought the series also a small screen embedded in the middle of the remote. The games were based on the LCD model from the old portable consoles. Because, attentive to detail: the console is the own control. Yes, yes, you read that right. 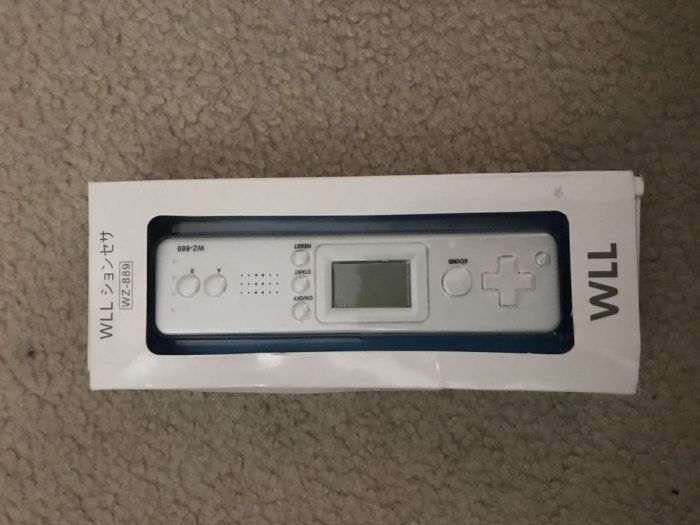 Turned the knob on a small console, although it is true that I could not reproduce cheap copies of Wii Sports as the previous, but small games of racing for which little or almost nothing had to do with a console like the Wii or the graphic quality of the era.

Finally, in the line of the Vii, also went on the market WiWi, with a version practically of the same name, and reiterative of the original name of the Nintendo. it Was a model that included the games by way of cartridges that agregábamos to the same, and the design of the controls overloaded, with a lot more buttons. And guess what: with a wonderful copy of 16 Bit Sports Game, which included supposedly to 198 sports and activities in a single cartridge.

in Addition to accessories, precisely, not missing, he possessed in addition a remote analog and a series of accessories pretty ridiculous compared with the aspect which usually shows the truth. As a miniaturization. The main charm of the console was to sell the concept of that with your purchase also we acquired 198 games on a single cartridge, which can be enjoyed from beginning to end. Today, it is possible to find some of those accessories of head reduced in some Internet pages, such as paddles ping pong, racket or golf club. That in the end they were small extensions of plastic that were added to the control of the same console.

we look forward as always to have my day with these fakes Wii, and very soon, if you maintain the content like this, we will continue with this particular passage of horrors. Of course we’d love to see in comments what are your findings, “bootleg” of consoles, video games, or hardware within the video game industry. Even merchandising of characters from video games, everything that occurs to you.
Vandal