Awards Android Excellence: the 32 apps and games that are more excellent according to Google 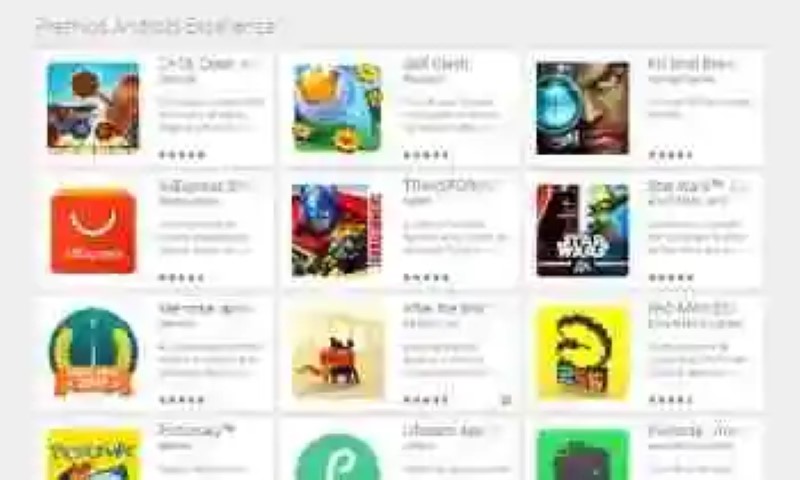 Awards Android Excellence: the 32 apps and games that are more excellent according to Google
starting today, Google is going to recognize great work and effort carried out by many developers to launch applica...

starting today, Google is going to recognize great work and effort carried out by many developers to launch applications and high quality games, and for that it is not lost among the more than one million apps and games available on Google Play now take place on showcase special.

Google will give a greater visibility to the applications and quality games with the new collection of applications and games Awards Android Excellence, awards the excellence, a new paragraph that is located within the renovated section of Editors’ Choice editors) from Google Play

► Karin Kanzuki and R. Mika could also be added to Street Fighter V Yesterday Alex and Urien filtered. Yesterd...
► So is the new player of Netflix for Android: – forwards or rewinds accurately Netflix renewed the interface of your Andro...
► Valve recommends that you turn off Xbox Game DVR to play DOTA 2 Adversely affects the performance of the gam...

Each quarter Google will renovate this window with the apps and games that are more excellent, those that have a great design, good technical performance, a good location and the best optimization for the device, thus complying with best practices. The selection for this summer is as follows:

In total is a selection of 16 amp and 16 games. In the fall Google will renew this showcase with a new selection, in which you open new apps and excellent games to discover.

–
The news Awards Android Excellence: the 32 apps and games that are more excellent according to Google was originally published in Xataka Android by Cosmos.

The work remote will continue to grow
The work remote will continue to grow, as there are many good reasons to s...
Phineas and Ferb: The Day Doofenshmirtz for PS Vita will arrive on November 11
The game Virtual Studio confirmed its release date. Sony Computer Entert...
Eddie Murphy makes a mockery of the original design of the movie of Sonic with a funny cake
The actor participated in the last show of Saturday Night Live and took th...
The manufacturers give us buttons with exclusive features and we only want to change them
This year the manufacturers have worked hard enough to tempt us to buy th...
Bibliography ►
Phoneia.com (June 13, 2017). Awards Android Excellence: the 32 apps and games that are more excellent according to Google. Recovered from https://phoneia.com/en/awards-android-excellence-the-32-apps-and-games-that-are-more-excellent-according-to-google/

This article was published by Phoneia, originally published in English and titled "Awards Android Excellence: the 32 apps and games that are more excellent according to Google", along with 18986 other articles. It is an honor for me to have you visit me and read my other writings.
◄ Instagram already allows you to save in a private archive the images you don’t want to delete
Machine Games talks about Wolfenstein II: The New Colossus ►