The longest distance on a tightrope with heels

The book of the Ginness Records gives for all kinds of oddities, and one of them is to make the longest journey on a tightrope. Of course, up to here everything normal, what happens is that it is with heels.

The longest distance on a tightrope with heels
The book of the Ginness Records gives for all kinds of oddities, and one of them is to make the longest journey on a... 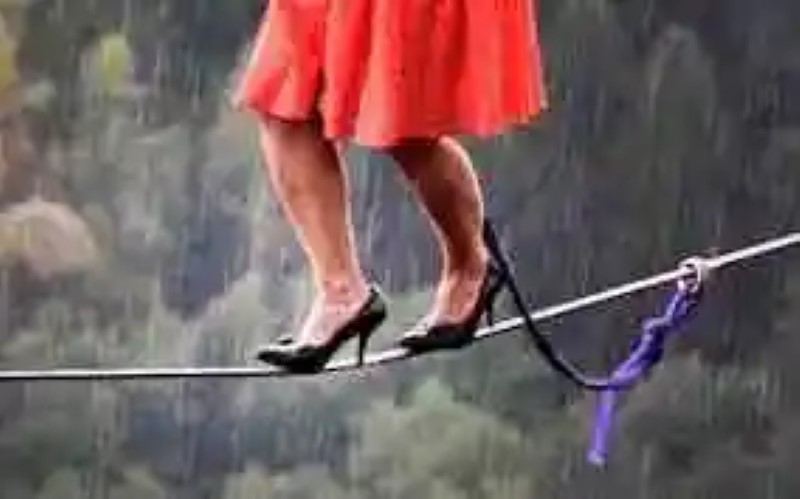 One of the stunts that almost nobody would be willing to do, is to cross a tightrope, at a considerable height and as if that were not enough, with heels. But Chelsea McGuffin, in Sydney Australia, dared to pass a tightrope of a measure of 7.2 meters, using heels whose tip was more than 12 centimeters. The height of the rope was not at all low, but was 2.42 meters from the floor.

► 10 things you do not know about the vagina (curiosities) Hundreds of myths have been woven around the...
► Selena Gómez is seen in her body what really happens to her Selena Gómez, one of the most famous ac...
► The mysterious and fearsome fire tornadoes Nature is very beautiful and offers us beaut...

This type of acrobatics originated in Nebraska, with the name of Funambulismo and it is about that a subject walks on a rope crossed between two points, some acrobats use some kind of tool to maintain the balance, like holding a rod, or also to hand raised, with only his body and arms to stay balanced.

In most tightrope shows, what is most appreciated is the manipulation of elements, dances and movements in the string, as well as various methods of acrobatics in the same tensioned cable, together with objects such as hats, rings, canes and Rods to lean on balance.

The secret of the acrobats resides in locating their center of mass, essentially on their base of support, which means that the greater amount of weight is supported by their arms, legs or any other part of the body that is being used to support themselves.

In the case of being on the floor, with the feet together, the lateral direction is wide, but the sagittal direction is very narrow. When it comes to acrobatics in important heights, the feet must go parallel, that is, one facing the other and the ankle is the one that plays the pivot point function.

Some pranayama secrets
The "official" history of humanity and the general academic teachings have...
Three of Swords Tarot card meaning
Symbology Named after the Three of Swords, this card comes to occupy the...
The referee who decided to deliver justice with a gun
Football is definitely a sport that arouses passions, mainly among fans an...
The man who built a building with bottles
Architects always manage to surprise with each project, innovating not onl...
Bibliography ►
Phoneia.com (May 1, 2019). The longest distance on a tightrope with heels. Recovered from https://phoneia.com/en/curiosities/the-longest-distance-on-a-tightrope-with-heels/

This article was published by Phoneia, originally published in and titled "The longest distance on a tightrope with heels", along with 18987 other articles. It is an honor for me to have you visit me and read my other writings.
◄ The true story of the Smurfs
The largest power plant in the world ►