Metacritic publishes the ranking of the best companies in 2016

Electronic Arts is the best valued in this list.

Metacritic, an aggregator of critical video games, music, movies, books and television, has published list of editors that they have launched a better catalog during 2016. This ranking does not take into account the sales or the valuation of the players.

The page has divided the list into two groups. The first is the large publishers who have published 12 or more games during the past year -previously 14, but has been changed by the downturn of new developments. The second list consists of editors of medium size, with 6-11 releases per year.

This analysis also picks out the best and worst games of each company. In the case of EA, Titanfall 2 for PS4 received the best scores, while Need for Speed (PC) the lowest.

The first ten posts are the following: 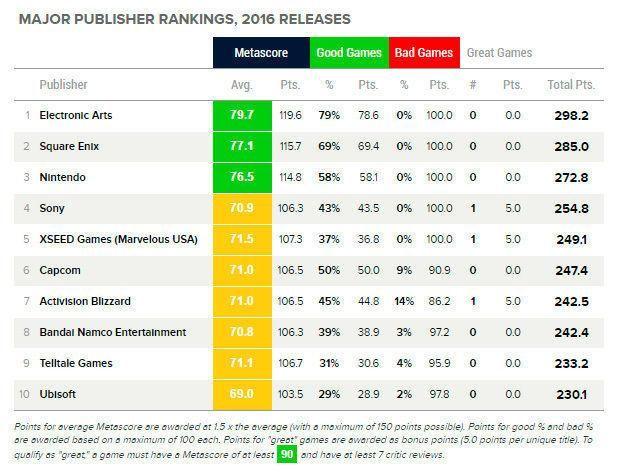 The category of editors stockings is led by Paradox Interactive, followed by Sega, Microsoft, Take-Two and Warner Bros. Interactive.

As a curiosity, Metacritic mentions that one of the greatest decreases in the valuation with respect to 2015 is suffered by Deep Silver, hurt by the cold reception of Mighty No. 9 and Homefront: The Revolution. Metacritic publishes the ranking of the best companies in 2016
Source: english
February 15, 2017