It will include an object in the next version of the game.
Guppy , the cat Edmund McMillen ?? creator ?? died on August 19, with only 7 years old, and the developer has announced that it will include a small tribute The Binding of Isaac: Rebirth
Specifically, include its collar, allowing us to obtain a 50 percent chance of resurrecting if we die after passing room with only half a heart of life. Guppy is already a playable character in the title, we can control if we put different “parts” of the animal.
Rebirth is three times larger than the original version of the game . In total we will have over 450 items available, 50 new enemies, over 15 bosses to be defeated, battles in which we have to defeat several bosses at once, 500 possible rooms for each chapter, triple five levels new types of special rooms
The Binding of Isaac. Rebirth will launch in PC, PlayStation 3, PlayStation Vita PlayStation 4 and throughout this year 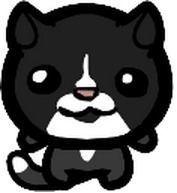