‘The house of paper’ is the number of non-English-speaking more view: Netflix says that 44 million subscribers were hooked to season 3 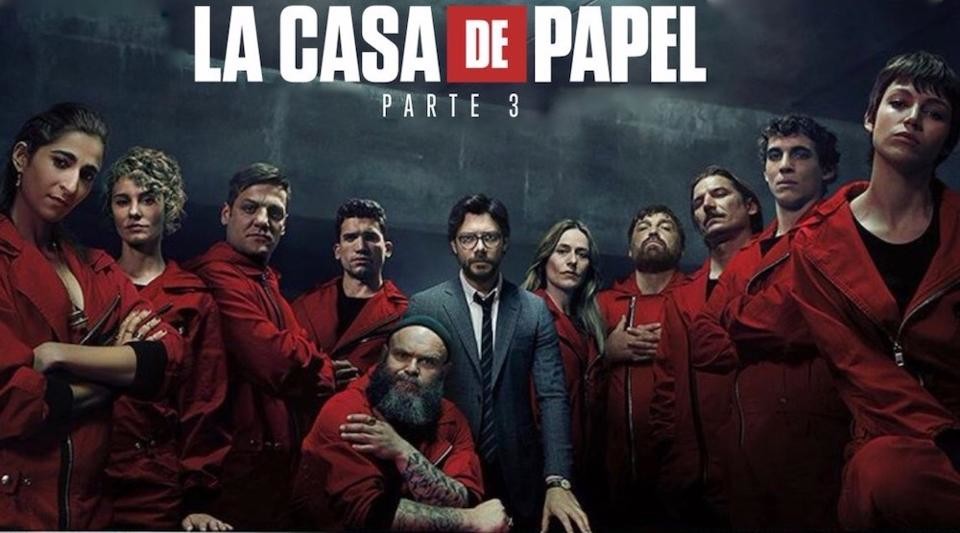 According to a report by the New York Times, the Spanish series occupies the third place in hearings of Netflix, only surpassed by ‘Stranger Things‘ and ‘The Umbrella Academy‘. is An authentic plunked in the form of 44 million subscribers enjoying the raids of the thieves most well-known in the world.

Netflix had remained tight on how many people see your content original, but a report in the NY Times has awarded the daunting figures of its success in feature films and series. Earlier this year Netflix started doing something it hadn’t done since they began issuing their originals in 2012: to reveal figures of audiences for its series and original movies.

The platform, which has more than 158 million subscribers around the world is not revolutionized their ads, but began to include data in its quarterly reports to its shareholders since January.

With the announcement of its balance sheet in the third quarter of 2019, Netflix has made public the audience data of the films and television programs original most viewed during the year, from October 2018 until the past month. 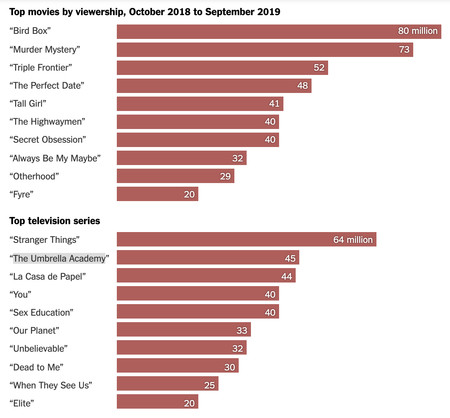 At the top of the list of your tv series is, how not, ‘Stranger Things’ with 64 million views that no one, probably, can’t even match. In the second place, the other plunked youth, ‘The Umbrella Academy’, with 45 million visits. Very close, almost tied, appears in Spanish fiction ‘The house of stock‘, with 44 million subscribers, astronomical figure that makes it the most successful Spanish-language television is a figure

In terms of the original movies from Netflix, the most views are the thriller Sandra Bullock ‘blind‘, with 80 million visits, and the comedy of Adam Sandler ‘Murder Mystery‘, with 73 million. The most frequent opinion free say that those millions of clicks on the comedy of Sandler have no explanation, but I think that what is not explained is what of the first film.

‘Elite‘ closes the ranking with 20 million viewers, another amazing figure that surely no one would have imagined in advance. At a meeting with investors, the head of content Netflix Ted Sarandos, suggested that the company could start to make the information on their most popular programs more widely available, possibly going beyond the sections “Popular on Netflix” and “Now trending” on the welcome screen for subscribers. Why?

'The house of paper' will have a fifth season: Netflix prepares a new blow of the most famous band today

Trailer for 'How to live with yourself': Netflix doubled to Paul Rudd in a new comedy series and science fiction

Trailer for 'In the high grass': Netflix presents the adaptation of Stephen King and Joe Hill, the director of 'Cube'

–
The news ‘The house of paper’ is the number of non-English-speaking more view: Netflix says that 44 million subscribers were hooked to season 3 was originally published in Espinof by Kiko Vega .

Premium WordPress Themes Download
Download Premium WordPress Themes Free
Download WordPress Themes Free
Download Nulled WordPress Themes
udemy paid course free download
download redmi firmware
Premium WordPress Themes Download
lynda course free download
‘The house of paper’ is the number of non-English-speaking more view: Netflix says that 44 million subscribers were hooked to season 3
MoviePass lost more money than they said in 2018: the Netflix of movie theaters is still sinking in
late last year I had how does MoviePass, the flat-rate cinema —a so...
Agent 47 joins us this week to bring a new Hunting Bargains
Can the new movie Hitman is bad but its protagonist, Agent 47, is a ...
The crisis in the Spanish mobile
There is no doubt that the crisis we are living for some years, is pas...
Microsoft Australia negotiated an Xbox One S with the design of Lamborghini
A console with a unique design.With the launch of Forza Horizon 3 between ...

phoneia.com (October 18, 2019). ‘The house of paper’ is the number of non-English-speaking more view: Netflix says that 44 million subscribers were hooked to season 3. Bogotá: E-Cultura Group. Recovered from https://phoneia.com/en/the-house-of-paper-is-the-number-of-non-english-speaking-more-view-netflix-says-that-44-million-subscribers-were-hooked-to-season-3/