The new and impressive trailer for ‘Han Solo: A history of Star Wars’ presents to us the first mission of the smuggler 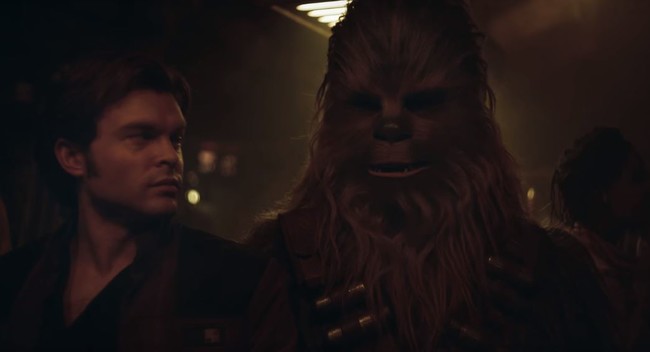 Disney it took a lot in the boot with the promotional campaign ‘Han Solo: A history of Star Wars’ (‘Only: A Star Wars Story’), which increased fears about a movie which had gone through various problems. The most striking was the dismissal a half of filming of its directors and original the signing Ron Howard to take his place. We’ll see how does that affect the end result, but for now we will have to make do with your spectacular new trailer.

This new spin-off of the saga created by George Lucas will tell us about the origins of the character immortalized by Harrison Ford, and that on this occasion will be played by Alden Ehrenreich –‘Hail, Caesar’ (‘Hail, Caesar!’)-. Only he will live here his first great adventure, which will take you to get to know your mythical co-pilot and to get to know the lover at play Lando Calrissian. Despite all the setbacks he has had to face, the movie looks great.

Remember that next to Erhenheich we will also see Donald Glover, now recently by the premature cancellation of the animated series of ‘Deadpool’ in which I was working, Emilia Clarke, the unforgettable Khaleesi ‘Game of Thrones’ (‘Game of Thrones’), Woody Harrelson, Thandie Newton, Phoebe Waller-Bridge and Paul Bettany, that in brief is also to debut the highly anticipated ‘Vengadores: Infinity War’.

Since we will not have to wait very long to see ‘Han Solo: A history of Star Wars’, since its arrival in theaters is scheduled for the next may 25 -previously on display for the first time at the Cannes film Festival the 15th day of that same month-. Howard has worked against the clock to get it ready for the scheduled date and hopefully that will not stop to note the end result. Already there were more complaints than expected with ‘The last jedi’ (‘The Last Jedi’) and there will be few who will be looking forward to attack it after what happened.

'Star Wars', the spin-off Have Only confirmed their deal with the first official image

Here is the trailer of 'Have been Alone: A history of Star Wars', the spin-off on the past of the smuggler

–
The news The new and impressive trailer for ‘Han Solo: A history of Star Wars’ presents to us the first mission of the smuggler was originally published in Espinof by Mikel Zorrilla .