Writers ‘Have been Alone: A history of Star Wars’ explain the surprising cameo in the end 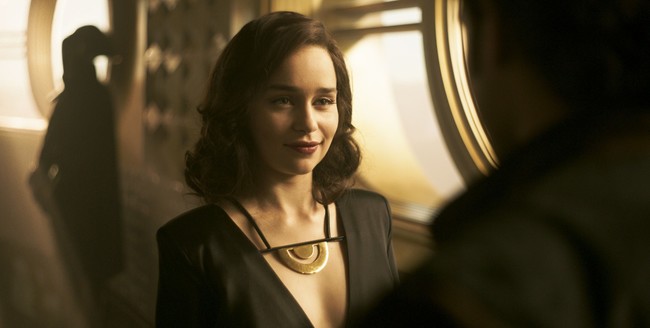 The spin-offs should expand the universe Star Wars with new stories and characters, however, are still using popular characters (as in the comics). In ‘Rogue One’ recovered to a character of the animated series, Saw Gerrera (Forest Whitaker), and the great villain of the saga, Darth Vader. Of course, ‘Han Solo’ focuses on the origins of the charismatic smuggler who played Harrison Ford.

Have is not the only old friend who returns to the big screen. The posters and the trailers made it clear that the hero would come to know in your spin-off to the loyal Chewbacca, his best friend from here on out, and truhan Lando Calrissian, who will be found in ‘The empire strikes back’. However, Lucasfilm had booked a big surprise for fans in the form of cameo. So as not to reveal the SPOILER who has not yet seen the film, we talked about it in the next paragraph…

In several moments of ‘Han Solo: A history of Star Wars’ there are clues indicating that the villain Dryden Vos (Paul Bettany) work for someone more powerful. In the end, Qi ra (Emilia Clarke) kills Dryden and I decide to take his place, rather than follow the uncertain path of Have (Alden Ehrenreich). Then, Qi ra establishes contact with the mysterious boss of Dryden and appears on the screen… itDarth Maul!

Maul survived his duel with Obi-Wan in ‘The phantom menace’

The last time we saw the character on the big screen was in the spectacular final duel of ‘Star Wars: Episode I – The phantom menace’, where your body ended up split in two after a fast action of Obi-Wan Kenobi (Ewan McGregor). ‘Han Solo’ takes place decades later, so how can you explain your cameo? The answer is in the animated series of the saga: Maul returns ‘Star Wars: The Clone Wars’, with six-legged mechanical.

No, is not dead for the wounds caused during the fight with Obi-Wan, nor by the fall. Maul was a badass. But was tossed out by Darth Sidious, he lost his status as a sith and became insane; his brother Savage saves him and, thanks to the magic and the technology, gets a new legs robotic that will return the smile. And is dedicated to activities of criminals, of course. Again in another animated series set decades later, ‘Star Wars Rebels’, where she has another confrontation with Obi-Wan…

In ‘The Clone Wars’, Maul led an alliance criminal called the Shadow Collective, destroyed by Darth Sidious. ‘Han Solo’ takes place years before the ‘Rebels’, and we discover that Maul is in control of another evil organization known as Alba Scarlet (Crimson Dawn). In two recent interviews about the new film ‘Star Wars’, writers ‘ Lawrence and Jonathan Kasdan explain the unexpected cameo of the villain:

Jon Kasdan: “Maul entered in this criminal underworld and, in the canon, this particular period of his life had been diffuse and gray. This gave us an opportunity to say: OK, can we use that character? And if so, does it really fit well in a world of savory characters?”

JK: “I loved the character. Had planted the seeds previously, I wanted to be built that way. And I wanted to make reference to certain forms of martial arts that could lead to him. And the presence of someone so terrifying in this criminal world, you had to know that he was the guy who could control someone like Dryden. So that was an essential part of the DNA of all of that.”

Lawrence Kasdan: “[To keep the surprise in case of leakage] is never named specifically in the script. Only said: ‘A character too secret even to be named’. Everyone did a great job keeping the secret, and it was a pleasure to work with Ray.”

In ‘The phantom menace’, Maul had the physical Ray Park and the voice of Peter Serafinowicz; in ‘Han Solo’, Park re-interpreted the character, though now the speaker is Sam Witwer, which also puts the voice to the character in the animated series. In this way, besides the appearance and the weapon that he wields, there is a greater connection with the version of Maul that appears in ‘The Clone Wars’ and ‘Rebels’.

it should Be added that the villain remained a popular character among the followers of ‘Star Wars’ and has come to star a highly-rated, fan-film. The end of ‘Have’ Only ‘ leaves the door open to his return even though the figures of the premiere in box office have been so disappointing that perhaps Lucasfilm rule out making sequels and don’t come back to see him. What do you think of the cameo, has been a good idea to recover to Maul?

'Have been Alone: A history of Star Wars', a charming adventure with the spirit of the western most stale

Lucasfilm wants a spin-off of 'Star Wars' on Lando Calrissian

Romances, murders, kidnappings… which gives us a laundry in this film

–
The news The writers ‘Have Only: A history of Star Wars’ explain the surprising cameo of the end was originally published in Espinof by Juan Luis Caviaro .

Writers ‘Have been Alone: A history of Star Wars’ explain the surprising cameo in the end
Source: english
May 28, 2018