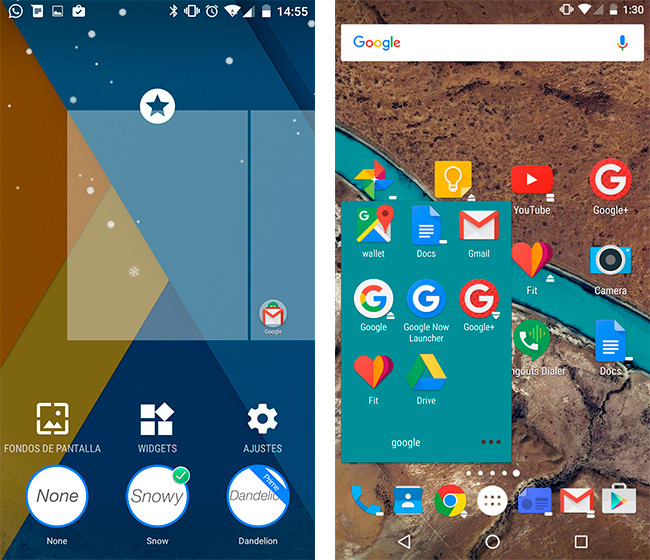 When it comes to launchers for Android sure that everyone will come to mind classic: Nova, Action, Smart, Apex … There are plenty of apps to customize your desktop and each time a new one appears, is very difficult to make a hole. It is difficult to innovate and bring new ideas but occasionally there are developers who manage to surprise us in a niche with many names.

Launcher X is, Briefly, a cross between Nova Launcher and Launcher Action. Ie take the best of Google experience and add shortcuts in a floating menu on the left side. Beyond this summary we have a launcher which offers many customization options and, if we begin to inquire, we have a tool that allows us to touch every aspect of desktop and application drawer

One of the launchers with more customization options

Once installed Launcher X launcher could pass for a more . His appearance nothing open is the same as we encountered when using Google or Nova Launcher. Simple, along the lines of material design … As soon as we begin to tinker a bit we discovered one of his virtues. By swipe on the left side launched a menu with various shortcuts

With this addition is impossible Action Launcher not remember anything like that advocates a side menu with shortcuts . Here we find some default controls energy (resulting whith which shows the top notification bar) but if we want more personalize touch and tell us what we want to add to the list. 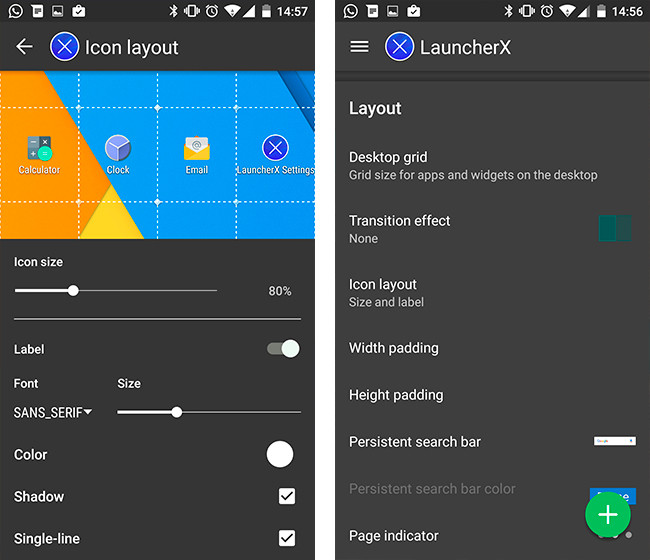 The most amazing thing Launcher X are all hiding customization options in the settings menu. It can change a lot of parameters : from classics grid changes to show more or less at older icons as choosing another font or display the apps drawer sections options

<. p> Many small details that will make us throw in a long time customizing the launcher. It allows backup and yes, it is compatible with the icon themes that find in Google Play. The gesture support (double tap, horizontal and vertical sweeps …) as well as swipes over the icons for applications (useful to run quick actions) are included as well but you need to pay to activate them: about 5 euros. The rest is free and without advertising.

The only downside is that you have Launcher X is still a little green . The first feeling with it is a bit rough. Works fast, it is fluid but until we entered the settings menu did not discover the full potential it has. In that interface it looks not much so in addition we need to have some patience with him. Fortunately many can preview the changes directly without having to be in and out all the time.

You have to give time the launcher slow to mature, but what we’ve seen so far has liked. Highly customizable, fast and flexible enough to suit all types of applications. Now, we need to polish some aspects of design menus and incidentally bring a translation into Spanish but I am convinced that future updates will go on coming.

–
news Launcher X, a promising candidate to be our new favorite Android launcher was originally published in Engadget Android by Juan Carlos Gonzalez .