At the end of last year the saga Leisure Suit Larry came back to PC with the launch of its new adventure Wet Dreams Don t Dry, that after coming this summer to consoles and iOS devices, finally lands on Google Play.

Leisure Suit Larry – Wet Dreams Don t Dry is the return of a classic from the 80’s and 90’s, which recovers the essence of this popular adventure but by moving his story to the present.

In this new adventure, the rogue of Larry Laffer appears mysteriously in the 21st century, in particular, to 2018, the year of the release of the game, is not already in the 80’s and don’t know how he came, much less get by in the present.

Larry continues with the same mentality and sense of humor in the 80’s, but will be updating along an adventure full of parodies with the social networks, the new way that the character will have to link to. 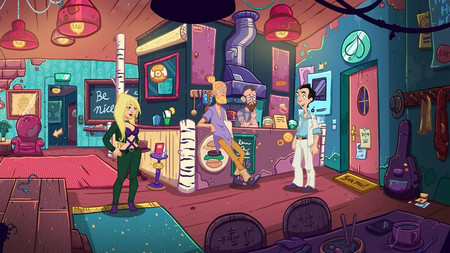 Leisure Suit Larry – Wet Dreams Don t Dry respects the classic gameplay of the adventure games, Point & Click. We will go to playing the scenario for discovering objects and to maintain conversations with the characters.

The adventure offers us 30 hand-drawn levels and filled with puzzles. Download is free but you only can play the first chapter. To unlock the full version of Leisure Suit Larry – Wet Dreams Don t Dry to be paid 14,99 € . The game is subtitles Spanish with voices in English or German.

Batman: The Telltale Series premieres on Android with the first episode free

Minecraft: Story Mode is passed to the free download so you can play your first episode without paying