True or false, general knowledge game for iOS and Android 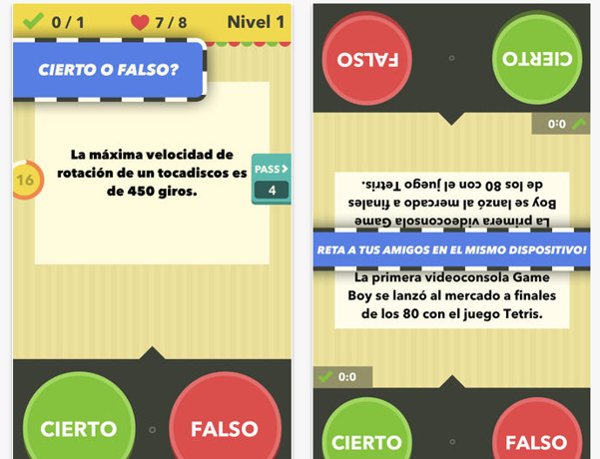 True or False is a free game of questions and answers which tests the general knowledge of hundreds of trivia player related to movies, television, music, sports, geography, science, health, biology and many other areas of interest.

The idea of ​​the game, individually, is go answering hundreds of questions of true and false in the shortest time possible, using only two buttons (green if you consider that it is true the data that appears red if it is believed to be false), with some wild, spending less many lives as possible and getting enough points to unlock a new level with more difficulty, with fewer lives available and more complex questions.

Already in multiplayer mode to play with another person simultaneously in the same device . For this, the screen is divided into two equal parts and each half buttons appear true and False , is awarded one point for each correct answer and / or incorrect response adversary. Finally the first to reach 9 points wins the game.

It has few configuration options and some additional options to connect Facebook and interact with friends who also play True or False . By the way, it is clear that the game is also educational because in the event that the answer is not correct, immediately show the reply or correction to the data shown. Download Links: True or false for Android | for iOS