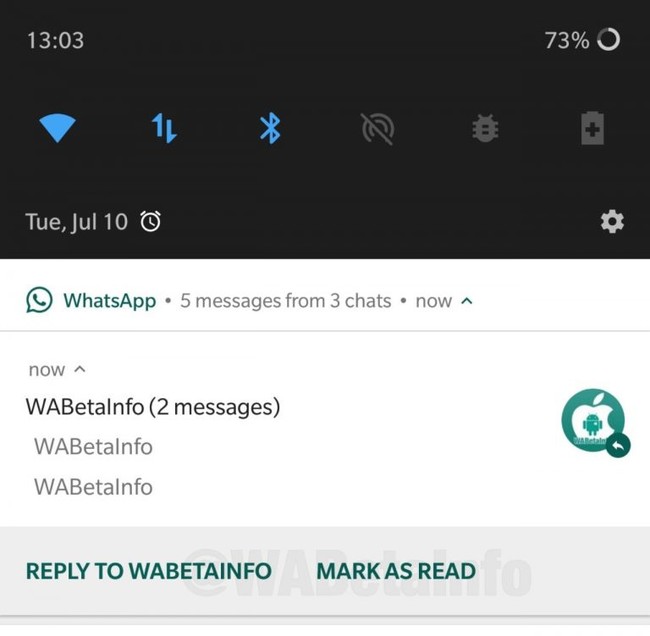 Without haste but without pause, WhatsApp va implementing enhancements to make your app more comprehensive and manageable, and as it could not be otherwise, anticipates the arrival of the changes through its beta versions. Anyone can register and participate, have access to preliminary versions of the application, and also potential failures that they draw, of course.

One of the future changes that come on the way to WhatsApp has to do with the marking of messages as read, something that can be done since a long time from the list of chats, but that soon will be able to do it also from the notification bar. No longer appears, only the button to respond, but that we will have an additional one.

The new functionality still remains hidden, and gets attached to the version 2.18.214 of WhatsApp for Android. the To make use of it, you must have ROOT access and activate it on our own, but that is already embedded in the source code tells us that it will be released sooner rather than later. Surely it will not take in to know of it officially.

The information has revealed WABetaInfo and also add a screenshot on how it will work this future-added of WhatsApp. When we receive a message, we’ll just display the notification in order to have two buttons.

The already known “Answer” and the new “Mark as read”. This new feature will do exactly the same as that applied from the list of chats, to make disappear the notification of a new message and send a confirmation to the person who has sent it. Or the group, depending on what type of chat we move on.

As we say, the functionality remains by far hidden. At the time of the writing of this article already is in circulation in the version 2.18.215, the post that has brought us here, and we continue to have no access, but we already know that comes from way to Google Play, and who knows if also the App Store, while iOS works differently in terms of notifications and implements the news a little later.

Other data provided by WABetaInfo is that the notification of WhatsApp will become even more complete in the future. If now we can answer and soon we will be able to mark the message as read, in the future we will be able to mute your conversation directly from the notification without access to the application. We will see what structure you print WhatsApp your notifications, because the buttons will have to go by compressing.

Via | WABetaInfo
Xataka Android | How to upgrade WhatsApp for Android

–
The news WhatsApp will allow you to mark a message as read from the notification bar was originally published in Xataka Android by Samuel Fernandez .

phoneia.com (July 13, 2018). WhatsApp will allow you to mark a message as read from the notification bar. Bogotá: E-Cultura Group. Recovered from https://phoneia.com/en/whatsapp-will-allow-you-to-mark-a-message-as-read-from-the-notification-bar/