Trailer of ‘See’: the bet post-apocalyptic Apple TV+ with Jason Momoa arrives alongside new details on the streaming service


This afternoon, the partner of Applesfera have had extra work; because the company, Tim Cook has given a brand new keynote in the Steve Jobs Theater in which, in addition to presenting their latest innovations in terms of dispositivos regards, has announced more details about the impending service with which you will enter fully into the streaming wars: Apple TV+.

During the presentation, in addition to providing new data on the price and availability of the platform —on which I will go into more detail later on—, presented the trailer of ‘See’: one of the first series exclusive to the service, created by Steven Knight —‘Peaky Blinders’—, directed by Francis Lawrence —‘Sparrow red’— starring Jason Momoa. There is nothing.

The disappointment of Apple TV+: missing more than four faces of prestige to compete with Netflix of truth

‘See’, whose production design, everything is said, has a spectacular painting, is set in a post apocalyptic world in which a virus has not only decimated the population, but has lost the sight of the survivors. In this context, Baba Voss —the character of Momoa— will have to defend their new born twins for a queen to rival that wants to destroy them for having been born with sight.

making its debut alongside Apple TV+ 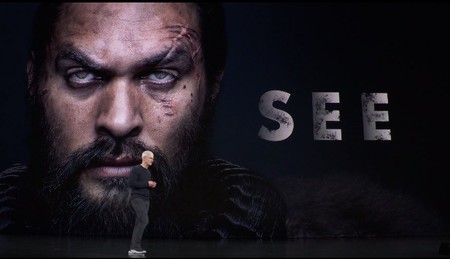 The series in question will be available next November 1, coinciding with the world debut of Apple TV+, whose monthly subscription —that we can share with our family members— will have a price of 4,99 €. Without a doubt, very competitive in comparison with their major competitors.

As an added bonus, mr. Cook has announced that anyone who buys an Apple device —whether, for example, a Mac, an iPhone or an iPad— you will get an annual subscription free of charge. It may be a maneuver of the smart thing to do— to begin to attract users despite the limited catalog with the Apple+ will come out.

'The Morning Show': the new trailer for the series of Apple introduces the rivalry between Jennifer Aniston and Reese Witherspoon

First trailer for 'The Morning Show': Apple board Jennifer Aniston, Reese Witherspoon and Steve Carell in their new original series

Trailer for 'Dickinson': Hailee Steinfeld gives life to the latest version malota of the poet in the series of Apple

–
The news Trailer of ‘See’: the bet post-apocalyptic Apple TV+ with Jason Momoa arrives alongside new details on the streaming service was originally published in Espinof by Victor Lopez G. .