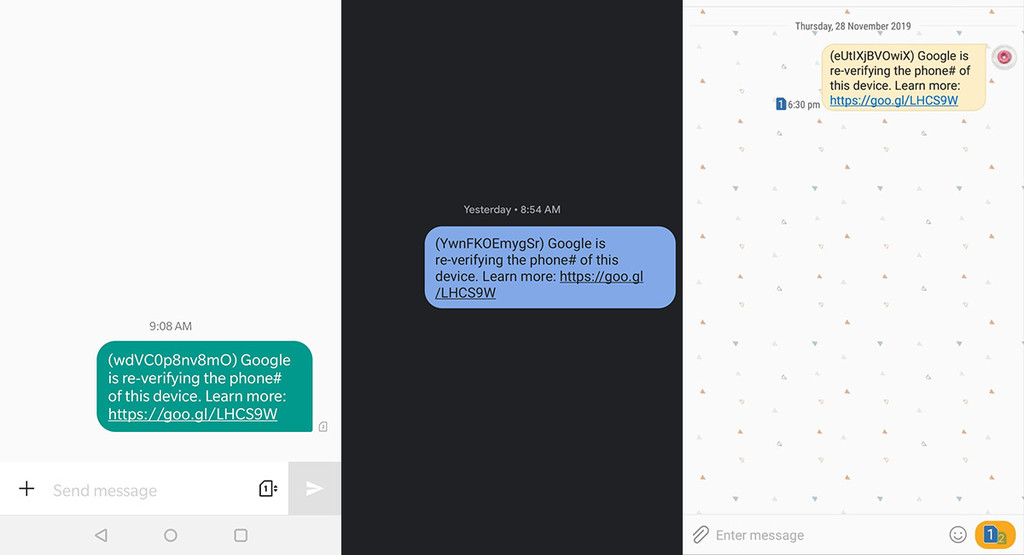 To verify a phone number, usually you have to wait until you get an SMS message with a code to enter back in the application or web page. However, dozens of users are reporting of the reverse process: is Google the one that sends the SMS, from the user’s mobile.

If you have discovered SMS messages suspects sent from your mobile phone to unknown numbers, it is possible that it is this verification process. Google claims that it is “normal”, although the process is far from optimal in both form and content.

The re-verification of Google

Several users, most of them from India but also some from Europe and the united States, have been shared on the Google forums the appearance of suspicious messages sent to you by mobile. In the message includes a code and the text “Google is re-verifying your phone in this device”, as well as a link the help page.

the code in The beginning and, especially, the fact that the messages were sent to local numbers, which vary from one user to another and they are not listed officially as belonging to Google were the ones who did jump the alarms from the users, fearing that it was spam or some type of fraud.

I’ve looked at all the data that Google has on me, and I confirm that is the Big Brother final

however, it seems that this is a process of re-verification routine that, for some reason, it has become a bit more active during the past days. Google explains in its support page:

When you set up a Google account, you can indicate your phone number. If you do, we will verify that the number is yours.

For security reasons, we will return to check it periodically to make sure that this is still your phone number. When we do, it is possible to receive SMS from Google or your device to send messages to Google. An example message might be “Google is verifying the phone number of this device”.

This explains why, although the mode of verification seems a bit aggressive, potentially can affect additional costs to the user by sending this message. Not only that, but several users are asking to what extent can Google send SMS messages without any notice to you of this (several of these messages were sent early in the morning, while the user was not using the mobile).

The Google team is aware of this behavior and on the support forums it is stated that they are working on a solution. How and when it will come is yet to be know, so for the moment if you want to make sure you don’t pass, the only thing you can do is disable the permission of SMS to the application of Google.

–
The news Google is sending SMS to numbers mysterious in some mobile Android to re-verify the phone was originally published in Xataka Android by Ivan Ramirez .

Google is sending SMS to numbers mysterious in some mobile Android to re-verify the phone
Source: english
December 13, 2019