are thousands of articles on the web talking about the latest sensation in the world of video games, GTA V , and now a fan of the project has created an interactive map gta-5-map.com . 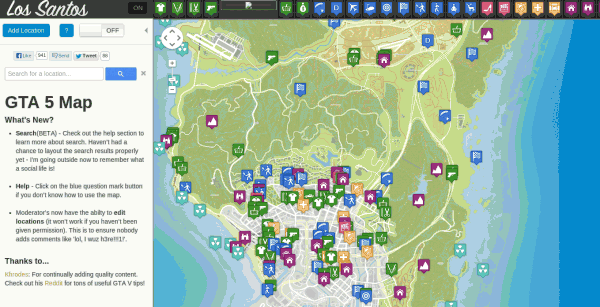 It’s been a Reddit user who has announced this resource that can help users quite” Grand Theft Auto V “, mimicking Google Maps to display the points of interest in the city of Los Santos and the places where they hide the “secrets”.

We can look and perform filters according to the icons at the top of the web, always marking the points that different users included in the system, thus increasing the information Available on the map

As with Google Maps, so we change to satellite Atlas, or show only the roads, helping to locate the best in the game.

The fever with this game is huge. In just 24 hours after its release grossed $ 800 million, 1000 million in the first three days, a record in this market. It was four years of development with 250 people working on the game, with the estimated development cost 265 million dollars, the most expensive on record, but if in 24 hours tripled this value, it seems that work has paid penalty.