The majority of today’s mobile integrates connectivity WiFi 802.11 b/g/n/ac, so you are able to connect to both networks of 2.4 GHz and 5 GHz. In the same way, the greater part of the routers relatively recent broadcast in both frequencies to maximize compatibility with devices both old and new.

This means that, when connecting the mobile to the WiFi, you have to choose between the network of 2.4 GHz or 5 GHz. But, why choose if you can have both? This is what I have had to think in Vivo at the time of proposing the new technology Dual Wifi Acceleration, which, in few words, it implies to connect to two WiFi networks at the same time to achieve higher speed and stability.

A more stable connection and faster 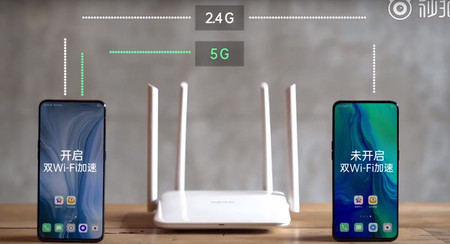 While the network of 5 GHz has less interference and a greater top-end speed, the network of 2.4 GHz offers a higher range, therefore, each frequency has its own advantages and disadvantages. The solution that proposes to Live, so-called Dual Wifi Acceleration, you try to precisely get the best of both to increase the stability and speed of the connection.

In a video posted by the company on the social network Weibo, we can appreciate how one of the devices IQOO connects first to a frequency of the WiFi network and then on to the next, for, a priori, to achieve a greater download speed and more stable connection than the other phone which uses a single network.

that Is to say, to connect to both frequencies, the phone can take advantage of the advantages of the networks for 2.4 GHz or 5 GHz depending on the situation. In some way, it is something similar to what you suggested with samsungs Download Booster, a feature that allowed us to download faster files more than 30 MB using the connection wifi and mobile network simultaneously.

For its part, OPPO (the company that, as I Live, also owned by BBK Electronics) has released another video that shows the operation of the Dual WiFi Acceleration in a OPPO Reno 10x Zoom with ColorOS 6, which is connected to a network of 2.4 GHz and a secondary 5 GHz. With this, it increases the download speed up to 322% and the speed of loading pages up to 44.5% in comparison with a WiFi connectivity standard.

The future has arrived: Chrome will remember your high score in Dino Run, the mini-game the dinosaur

Google Assistant on all parts: now also available on the web for Google

–
The news Neither the 2.4 GHz or 5 GHz: Vivo and OPPO proposed Dual Wifi Acceleration to connect the two networks was originally published in Xataka Android by Laura Sexton .

Neither the 2.4 GHz or 5 GHz: Vivo and OPPO proposed Dual Wifi Acceleration to connect the two networks
Source: english
July 19, 2019