Google Photo: we tested the recognition of faces, and suggestions to share with you that are banned in Europe 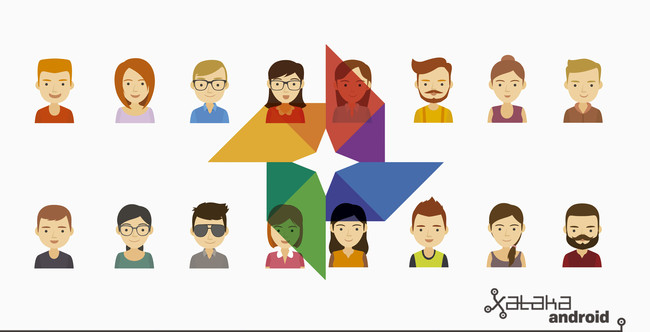 With its unlimited storage, there is no doubt that Google Photos is one of the services of storage of images in the cloud more practical. But the app of Google is not content only to save our photos, but also offers a good collection of options to organize more easily, one of them is the face recognition.

however, this function fails to comply with the privacy policy in Europe, and is deactivated in the countries of the Union such as Spain, but it is not the only one. The Suggestions for share that Google implemented recently are also not available on Google Photos because they rely on facial recognition. is How is it Google Photos when we are out of Europe? What we tested.

Tagging faces of people and pets

In the european version of Google Photos, within of the search section, you can find content from our library, if we specify the image type as, for example, selfies, screen shots or panoramic views. We can also look directly referring to items that appear in the image such as flowers or landscapes, activities, or even the place where the photo was taken. We can use many search terms, but what we can do is to search for specific people. 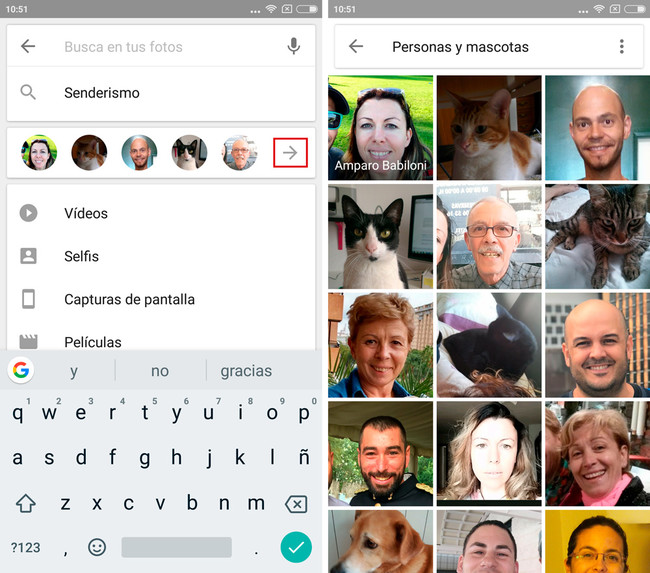 In contrast, when we are out of Europe, the face recognition is activated and appears a new section within the search menu. When you position the cursor in the search bar we will see a small strip with thumbnails of the faces that the application has automatically detected. If you click on the arrow that appears to the right of all to open the people menu, where are listed all the faces that you have found, including both people and pets.

If we don’t do anything, Google Photos allows us to see all the photos of that person by tapping on its thumbnail, but to get more out of it is interesting tag to each person (or pet) in an individual way, also to ourselves. 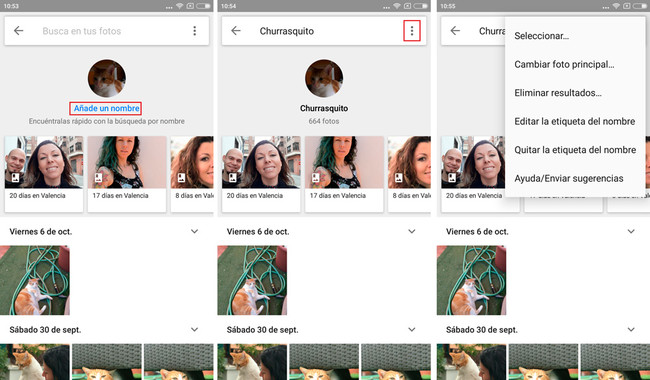 To do this simply select to whom you want and click on ‘Add a name’. If the person is in contacts, when tecleemos your name will appear on suggestions. Once you have the name configured, it is possible to edit or change the main photo that is displayed to search for pictures of that person.

In the above image you can see the steps to edit the name and change photo with a pet. The process is exactly the same with people as with animals. 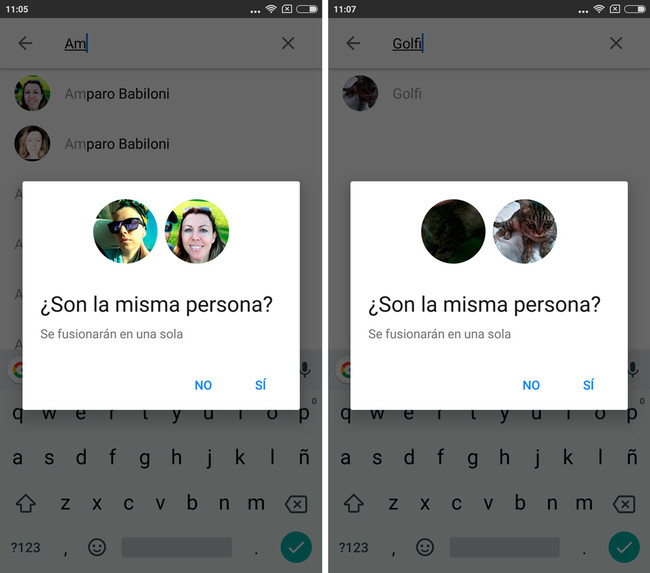 And how faithful is the recognition? A lot, but nothing is perfect. When tagging my photos I saw as detecting images in which the person in question was in the background of the photo and profile, but also saw it as sometimes detected to the same person as two different.

If the person in question changes their look very often, it is possible that Google Photos to believe that they are two different. Happens quite often with changes in your hair, or if we put on hats or head scarves, but sometimes it also happens by the light of the image or simply because the app is confused. In this case, by labeling the photos just put the same name and Google will ask if you are the same person, to say yes unify all the images under a single name. With pets also works just as well.

The recognition of faces is available in Google Photos from years ago, but Suggestions to share is a more new. Google announced it at the conference I/O last may and was recently implemented in the app but, as it depends on the facial recognition, remains a problem from the point of view of privacy, and for this reason it does not work in Europe.

the name of the function already makes it quite clear what is its purpose. What it does is to suggest people with which to share our photos based on who’s in them. If we go to paragraph Sharing, we will see several suggestions at the top that we can revise or ignore.

If we already have our friends tagged, the app knows who appears in the images and suggests people to send the album, which by the way is created automatically and select the best photos by using ‘machine learning’. If we choose to share them, when the rest of the people receive the images, the app suggested them to add your own to create an album together where we have both the photos that we have done as he has done the rest.

If the app recognizes the people that appear in photos, will automatically suggest to whom to send them. Perhaps one of the most curious are the notifications that we send, in the often ask things like “do you Want to send the pictures from yesterday to Daniel?”. I Admit that the first time I received one of these left me quite surprised and better understood that the recognition of faces involves a problem from the point of view of privacy. 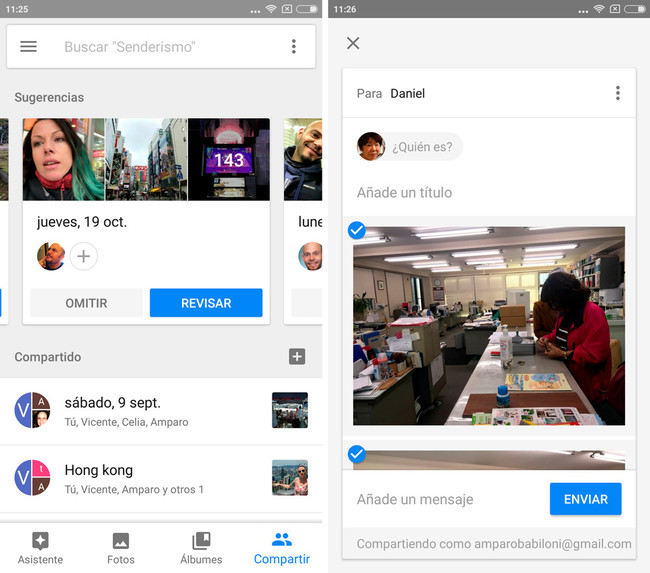 There are cases in which there appear more people in the pictures and Photos you can’t recognize. Here, if we decide to share, Google Photos, it will ask who is that person to add it to the list of recipients, as seen in the screenshots on these lines.

What is true is that the recognition of faces from Google Photos it gives a lot of game. by allowing us To tag faces is very simple to group all the photos of the same person in a place, which is an option within the European Union can only be done by manually creating albums (unless you can activate this function using a VPN).

there is No doubt that it is a practical function, but it is not the panacea. Perhaps it’s because I’m not used to using this function, but in the month that I’ve been using it neither has brought a drastic change in the experience offered by the app. I do Not think that take up a lot less when I return to Spain.

In Xataka Android | Google Photos premieres the new shared libraries, and suggestions for sharing, but not in all the world
cover Photo | Vector of Freepik

–
The news Google Photos: we tested the recognition of faces, and suggestions to share with you that are banned in Europe was originally published in Xataka Android by Amparo Babiloni .