Whirlybird, the game Google Doodle Jump android you already have on your phone

Lose the connection in the mobile is a small consolation if he was open Google Chrome: the famous game dinosaur. Simple, suitable even for a Game Boy and, however, so addictive that we don’t know of anyone who has thrown only one game. And something similar happens with Whirlybird, a Google play preinstalled on most Android that we didn’t know we had despite the fact that takes a few months in circulation.

how Many times you open the application Google Play Games? Therefore do it now, you will see that you have a Google play called Whirlybird. The graphic style is very similar to the aforementioned dinosaur of Chrome. And the mechanics is modelled on that in Doodle Jump, the mythical game of the first modern smartphones, in which he had to jump from cloud to cloud up to reach as high as possible. Board all of these elements and take the first game to Whirlybird: we challenge you to not string together one after the other.

A game to pass the time 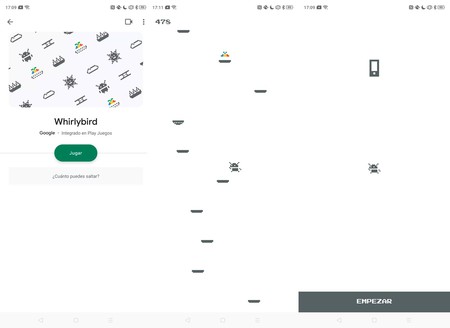 it is Not that Whirlybird is a wonder in the graphic since the aspect is as simple as possible, but there is also grace, on the simplicity. A small android grey of huge pixels and able to jump like a flea, platforms that float in the air and different added to the game to develop him, like a cap with a propeller to the Doraemon that has the unique colors of the game. As not, are the colors of Google.

As in Doodle Jump, in this game of Google Play games there are that you go jumping from cloud to cloud, avoiding the skewers and also to fall into the void, all by moving the phone (used accelerometers). There will be clouds to be solid, some that disappear after a first tread, springs, clouds and invisible until we cross with clouds with spikes, a whole-life analogy. And the cap of Google is a powerup that raises the android with a sudden impulse. Just go chaining jumps up to high score, nothing so simple could be so difficult. 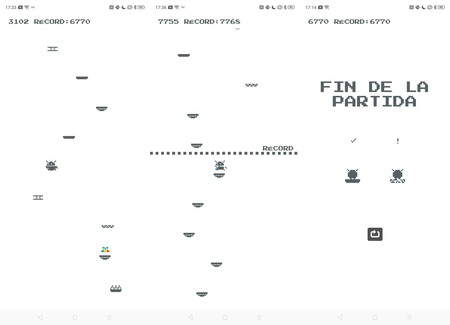 The curious thing about Whirlybird is not only that it is made by Google, that too, is that it comes pre-installed in the application Play Games. So you only have to open it to play: it appears in your collection of games, usually the first. Devoid of ads, not have purchases in the app and you can play without an Internet connection. A curiosity that is well worth the test, even just once. 'Sky: Children of the Light' will also come to Android: is already open pre-registration on Google Play

–
The news Whirlybird, the game Google Doodle Jump android you already have on your phone was originally published in Xataka Android by Ivan Linares .