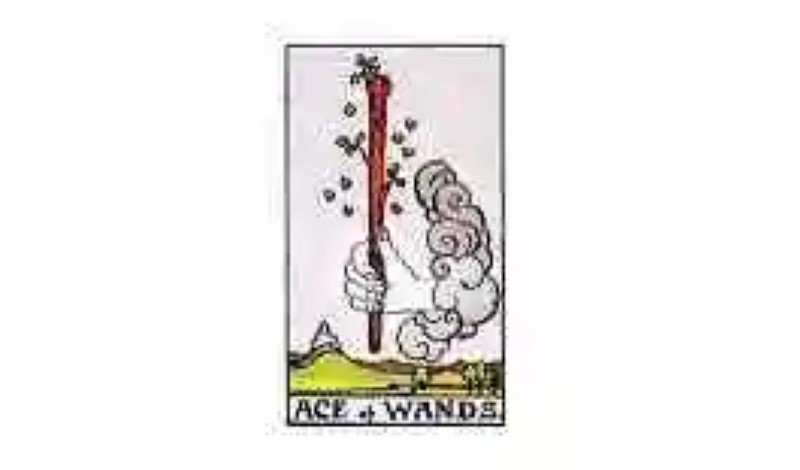 Ace of Wands Tarot Card Meaning
Symbology Named Ace of Wands, this card occupies the first place in the suit of Wands of the Tarot's lesser arcane...

Named Ace of Wands, this card occupies the first place in the suit of Wands of the Tarot’s lesser arcane.In this opportunity we offer you a synthesis of the meanings that are attributed to this deck by specialists in this divinatory art that emerged in the Italy of the Middle Ages.

As in the Ace of Cups, in the Ace of Wands we can also observe a great hand emerging from a cloud, and that holds a huge mallet or basto, from which some leaves are stoked, as a symbol of abundance and prosperity.

► The man who became a millionaire selling land on the moon In 1967, the United Nations established the ...
► The ugliest people in the world Beauty is only a pattern that sets the same ...
► Surprising uses of mayonnaise Within the world of culinary, it is known by...

Behind this image is unfolded a landscape of nature, starring a forest with its river, which seem to be illuminated with the light emanating the great basto and the hand that holds it, which is interpreted by some tarot experts as a sign or symbol of a great force higher.

In general, the Ace of Wands is interpreted by most cartomantics as a sign of great opportunities in all planes of existence, because its presence marks beginnings and births of new stages of high productivity and creativity.

It also refers to the inner plane of the consultant, indicating a stage of enthusiasm and joy. However, in some cases, depending on the accompanying letters, you may be indicating that the consultant hasn´t yet realized these new opportunities to gladly embark on positive directions.

For specific plans of existence, the Ace of Wands also keeps specific messages, for example, in the work area almost always indicate new offers that arrive at the door.

For the unemployed it points to obtaining a very good job; for those who develop some activity, the Ace of Wands becomes synonymous with growth and expansion, so it can indicate a rise or a new opportunity that comes to make us flourish. It may also indicate that the consultant experiences a sense of joy and productivity in the area in which it develops.

If the consultation is instead oriented towards the loving plane, the presence of the Ace of Wands may be indicating the arrival of a new love, which will be lived from passion and enthusiasm. Similarly, if the consultant already has a partner, the presence of the Ace of Wands can signal the growth of the relationship to a stage of greater commitment, such as the celebration of a wedding, the move together or the announcement of a pregnancy.

On the economic level, the presence of the Ace of Wands also brings good news, as it gives news of a process of financial expansion, which will bring great joyton to the consulted.

However, it should be noted that these gains will not come through chance, but as a result of the work and effort of the consultant, to whom this card also indicates the need to place the maximum of his creativity and effort to achieve an economic field Stable. In terms of health, the Ace of Wands also provides good aspects.

However, the presence of this card – according to the description of the tarot experts – almost always warns the consultant about the need to review all the internal and external aspects of our lives, in order to assess what we are actually managing our lives in the most efficient and organized way possible, or if on the contrary we are lacking throwandy when it comes to building new paths, trying new strategies and venturing into new challenges, which can bring us out of hand opportunities to Growth.

Likewise, this card announces the arrival of unexpected calls, cards, communications and invitations, which according to what the experts in this divinatory art announce, must be taken care of, because they bring with them new and good experiences. On the spiritual plane, the presence of the Ace of Wands heralds the beginning of a stage of consciousness and spiritual growth.

Some tarotists like to point out that this card announces the opening of the consultant’s third eye (the spiritual eye), so intuition, foreboding dreams and even the study of occult sciences are highly favored in light of this card from the Tarot.

In an inverted sense, i.e. head, like all cards, the Ace of Wands also has a meaning. Thus, the presence of this chart in this position does not indicate the loss of positive traits it has when it is in the right position.

However, inverted points out that the consultant has some difficulty in seeing those opportunities presented to him. It may also point to a certain fear or lack of enthusiasm for the consultant’s life. So you are almost always advised to cling to self-assurance and your intuition as a guide on the new paths you wish to take.

In the company of other cards

Likewise, the Ace of Wands also has a specific meaning according to the cards from which it is accompanied. For example, together with the Wizzard Card, from the older arcane, the Ace of Wands announces the positive entrepreneurship of a new company. Next to the Wheel of Fortune indicates blunt victory. On the other hand, in the company of the Temperance’s chart, it may indicate that the consultant is going through a stage of shyness.

So, even if it appears inverted, the Ace of Wandss also takes on certain meanings depending on the combination of cards of which it is a part. For example, the Ace of Wands inverted next to the Death Chart and the Cup Sota may signal mourning for the loss of a young man or a child.

Six of Swords Tarot meaning
Symbology Named after Six of Swords, this card comes to occupy the sixth...
The man with the longest beard in the world
There are truly amazing people and records, and one of them is that of a ...
The poverty behind the Colombian parties
This journalistic chronicle clearly reflects the landscape of a socially d...
War poems
War is one of the most devastating aspects of humanity and has claimed mil...
Bibliography ►
Phoneia.com (August 31, 2019). Ace of Wands Tarot Card Meaning. Recovered from https://phoneia.com/en/curiosities/ace-of-wands-tarot-card-meaning/