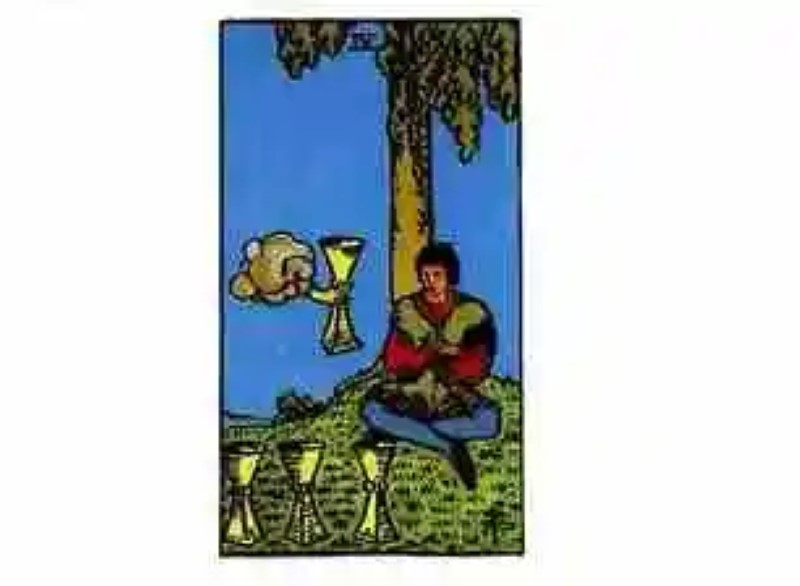 Four of Cups Tarot Card Meaning
Symbology With the name of the Four Cups this card occupies the fourth place in the Tarot Cup slab. On this occasi...

With the name of the Four Cups this card occupies the fourth place in the Tarot Cup slab. On this occasion we will make a synthesis of the symbolic features of this card, as well as most interpretations that make it, both alone and combined, the majority of experts in this divinatory method emerged in medieval Italy.

In this chart – according to Rider’s deck – we can see a man sitting with his back to a tree, under whose shadow he rests. It is crossed, in front of it there are three glasses. From the sky a hand, emerging from a cloud, offers one more drink, but man seems not to want to take any. Which for some can be interpreted as a sign of haste.

► Tower’s Tarot Card Meaning: Kabbalah Symbology Known as The Tower or also The H...
► Curiosities and things you didn’t know about the tiger The tiger could certainly dethrone the lion ...
► The National Hymns Products of Plagiarism Most countries have a patriotic symbol that ...

It is as if he is tired of living and his past (represented with the cups laid on the ground) and totally apathetic towards what the future offers him (which may be symbolized in the cup offered to him).  For some famous tarotists such as expert Rachel Pollack points out that the cloud in which the hand of the cup is wrapped may be related to the same cloud that is present in the Cup Ace Card.

In this sense, this tarotist indicates that this reaffirms that the offer represented by this card is positive and aimed at good opportunities with which happiness can be achieved.

Broadly speaking, and although it may seem contradictory or paradoxical, most tarotists agree to point out the Four Cups as the charter representing marriage as a civil institution, as well as the need to preserve it. It may indicate that despite routine or tiredness there can always be a new opportunity that offers those involved a relationship based on respect, harmony, good communication.

This card according to the opinion of the tarotists, points out that love is the engine that will move our lives towards fullness and a good future.

Although all cards must be analyzed in context, i.e. interpreting it alongside the accompanying cards, their appearance within a reading may indicate to the consultant their inability to feel optimism and desire to move towards a better future than lead it to progress.

Likewise, most tarotists have indicated that the appearance of the Four Cups may also be pointing to a personal moment where the consultant has decided, as the character of our card, to sit on the edge of the road to reflect on his past, even though that is delaying the time to face the future.

However, as some currents of thought point out, as well as thinking only about the future can cause us anxiety, concentrating our thinking only in the past, setting aside the here and now, it can lead us to a deep melancholy, for in addition to meeting people, moments and situations that will not return we realize that we can not change anything or that we could do better, even though nothing can really be done.

Thus this card refers to an individual who feels sad and apathetic about what his life has been like so far. It may also refer to someone who has decided to isolate themselves emotionally and live in self-absorption.

Generally speaking marks a person who feels unminded, and that the only opportunity he has to get out of that state is to reinvent himself and flow into the new paths that life offers, however the affected person does not get to see clearly those future paths or sees them pe ro feels not in the mood to continue.

Like all cards in this divinatory method, the Four Cups also has a meaning if it comes to appear inverted within a reading. In that case, most cartomantics have agreed to point out that so that as a right it marks a constant reflective state, taken to the extreme, when it is inverted marks precisely the opposite: the total impossibility of reflecting. Situation that can arise because of the concerns that the consultant is concerned about his life and the future, so the head is too preoccupied with them to take a stop on the road and think about the past.

On the other hand, this card may also be pointing out that the person suffered in his past some love disappointment and that he is currently closed to new experiences and loves. This card always speaks of a heart or mind closed to the coming of life and its new experiences.

Along with other cards

In combination with other cards it also has specific meanings. For example, if it appears next to the Tower, being the Four Cups symbol of marriage as an institution and the Tower sign of collapse, these two cards together may be indicating an upcoming divorce.

In the company of Temperance it also indicates that the person may be living a relationship that is weak or broken. In the company of the Nine of Blades this card warns about the proximity of the loss of a loved one.

Baha’i Lotus Temple in India
In the temple there are architectural wonders that we don´t usually know....
The Greatest Escapist Magician in History: Harry Houdini
His origins Erick Weisz, an Austro-Hungarian by origin, will go do...
The Tarot Force’s Card Meaning: Kabbalah
Symbology Known as The Force, this tarot card ranks eleven within the Ma...
The most jealous woman in the world. From bride to wife
Many people consider that in a relationship a little jealousy is fruitful ...
Bibliography ►
Phoneia.com (August 28, 2019). Four of Cups Tarot Card Meaning. Recovered from https://phoneia.com/en/curiosities/four-of-cups-tarot-card-meaning/