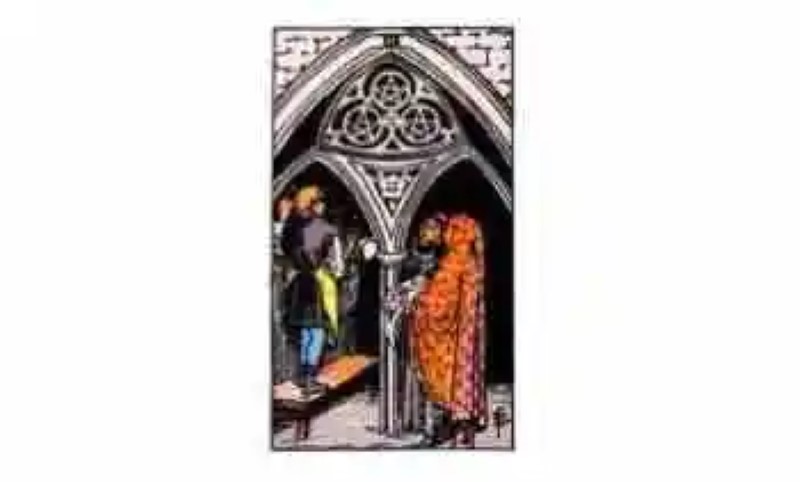 Named Three of Pentacles, this card comes to occupy the third place of the suit Pentacles of the Lesser Arcanes of the Tarot. On this occasion we want to offer a synthesis of the interpretations attributed to this deck by scholars of this divinatory method apparently emerging in the light of the Italian Middle Ages.

Based on the Tarot Rider, in this card we can observe how a trio of people are inside what we can identify as a chapel or church. One of the men, who most agree to point out as a sculptor, shows his work to the architect builder (who is actually a woman) who holds the plans of the church, and is in the company of a monk, while both listen to the explanation of the Craftsman.

► The Smurfs and the Seven Deadly Sins The Smurfs are an animated series initially ...
► Ghost Eye Syndrome Around the world many people have been force...
► Marie Curie Biography Maria Salomea (Warsaw, Zarato of Poland, 7 N...

On them you can see three coins, each inscribed with a pentacle, which the experts in symbology agree to point out as a symbol of the element Earth, which is also represented by the suit of Pentacles. Below these three coins is the white rose of the winds, also pointed out by the scholars of symbols as a sign of the four elements, the four cardinal points.

In this way, the three people gathered under these three coins symbolize the Holy Trinity. Also, for the experts in symbology also marks the sign of how important teamwork is, the need to coordinate with others and join forces, in order to achieve great achievements, something like that in the union is the strength.

As for the specific plans of existence, this card also has specific meanings. For example, in the workplace it refers to the opportunities to carry out large and momentous projects, only that it is necessary to have a team, because it is this that will guarantee us the support, advice, knowledge and strength necessary to realize large companies, however giant they may seem at first.

For the love plane, the Three of Pentacles is a card that also speaks of great events. If, for example, the consultant is single,this card tells you about sharing with several people, and even meeting a partner who will be of paramount importance in your life.

Conversely, if the consultant is in a relationship, the appearance of the Three Pentacles may indicate that their relationship is about to grow or get serious, so it can be interpreted as an early wedding, move or even the arrival of a child. However, this  card should be analysed in context, in order to correctly measure where this card points that the growth of the couple being investigated will be.

For students or people who are about to start a change or a new life, the presence of the Three Pentacles card makes a very good look because one of its meanings can literally be translated as the possibility or the moment when a person finds his place in the world.

So if you are looking for a job, wanting to take a new path or studying a business, it may be a good idea to take that step, because it is your destiny that has led you to it.

For health the Three of Pentacles also has meanings to be paid attention to,as their presence may be warning of the immediate need for a medical examination, which will lead to in-depth examinations, in order to a complete review of your health, which is advisable to do at least once a year.

With regard to the economic field, the emergence of this card speaks of the need that exists in the home, or in the couple, to join forces and ideas in order to incentivize the economic growth of the home. Together they can become prosperous, apart everyone will fight without being able to see great results, so it is advisable to smooth out roughness and work as a group or as a family to achieve important results.

Like all Tarot cards, the Three Pentacles stakes also have meaning if it ever appears inverted. In this case he loses a lot of the positive traits he had when he was right.

As for the love field, this card talks about a couple’s inability to marry. It may even point to the physical difficulty of the consultant or his partner having children.

In terms of economics, the emergence of the inverted Pentacle Three also speaks to the need to be alert with finances because hard times or narrowing times may be achieved. However – as with all cards – it is necessary to analyze it in context in order to be able to clearly see the scope of the card, both on its positive and negative side.

Other types of salt and their properties
We always hear that salt consumption is harmful to health, and that it is ...
The incredible case of the woman who feels no pain
Marisa de Toledo, a woman of Brazilian origin, has been recognized for ha...
Definition of presumptive diagnosis
The presumptive diagnosis is an almost immediate hypothesis that is releas...
He killed a man because he thought he could resuscitate him, and he failed
Science has shown the case of clinically dead people who come back to life...
Bibliography ►
Phoneia.com (August 31, 2019). Three of Pentacles Tarot Card Meaning. Recovered from https://phoneia.com/en/curiosities/three-of-pentacles-tarot-card-meaning/

This article was published by Phoneia, originally published in and titled "Three of Pentacles Tarot Card Meaning", along with 18988 other articles. It is an honor for me to have you visit me and read my other writings.
◄ Myths and truths about the negative effects of crossing legs
The strangest eclipse in history ►